Veneto and its Palladian Villas: Info, Tours and Art

The region of Veneto boasts over 2,000 villas or summer residences of antiquity, of which many draw inspiration from the architecture of the villas designed by Andrea Palladio.

Andrea Palladio worked as a villa architect from around the mid 1530's up until 1566. Within this period he built numerous villas that litter the Venetian countryside from Verona to the province of Treviso . The highest concentration of Palladian villas is in the province of Vicenza .

The talents of Andrea Palladio as an architect were first recognized by the citizens of Vicenza , for whom Palladio built numerous villas in and around the city of Vicenza . The first villa built by Palladio was the Villa Godi which sits of the soft undulating hills that rise to the west of Vicenza .

For most architects their first project is perhaps an extension to a pre-existing structure or a second-home hidden away in the countryside. The sheer size of the Villa Godi and its prominent position on the hills provided quite a challenge to the young architect.

Naturally, Palladio took no risks with the design of the Villa, as he did want his first architectural project to also be his last.But, in his description of the Villa is his fourbooks of architecture he remembered the Villa fondly, and in fact returned many years later to the Villa Godi to help plan-out the interior decorations of the Villa.

With the exception of the Villa Rotonda, most of the Villas by Andrea Palladio located in and around Vicenza are prime examples of an architect trying to realize his own true identity or his own particular style. These villas were all more or less restoration projects of previously built 14 th century manor houses.

But, as you drive through a maize of back-roads to discover many of these lesser-known villas, there is always something that catches the eye in the way Palladio is continually developing new ideas and systems through which his villas always seem to possess their own unique trademarks of the master.

Many of these Villas are privately owned and are not open to the public. But, there are several that are still open to the public, and its even possible to rent a Palladian Villa for those who are looking for a rather unique Italian vacation.

One of the more interesting Villas to visit is the Villa Poiana at Pojana Maggiore. Off-the-beaten track, rarely visited by tourists, this Villa offers the visitor the unique experience of being able to explore a Palladian Villa on the all three levels.

From the basement level which would have been home to the Kitchens and storage areas for the household and servant quarters, through the richly decorated Piano noble, to the attic storey where grain would have been stored in Palladio's time.

In the attic storey they have opened the timbers so that visitors to the villa can admire the architectural forms of the vaulted ceilings of the floor below.

The more celebrated Villas of Andrea Palladio are located in the province of Treviso , and along the Riviera Brenta close to Venice. Here we find the Villa Barbaro famous for its frescoes by Veronese, the Villa Emo which many regard as the Villa that epitomizes Palladio's vision of an ideal Villa, and of course the infamous Villa Foscari (Malcontenta) located on the banks of the Rivera Brenta.

These Villas were built in the late 1550's and early 1560's for a much wealthier clientele, the Venetians. Unlike, Palladio's earlier clientele the Vicentine's who having financial problems tried to limit the expenses of building a country home and so in many cases scaled back the designs of Palladio, the Venetians on the other hand requested Palladio to turn up the architectural volume so to speak. And, these Villas designed by a mature Palladio begin to show the hand of a true master.

Although, the Villa Malcontenta famous for its legend and awe-inspiring portico and the Villa Barbaro for its frescoes are the most visited of these Villas. It's probably the Villa Emo that is the highlight for most people touring the Palladian Villas.It's the only surviving Palladian Villa that truly reflects a 100% the ideals of Andrea Palladio. The plan and design of the Villa was executed to the exact specifications of Andrea Palladio. His other villa designs went through major changes and compromise before being built, whereas this particular building is pure Palladio.

It was built as a party house, place to entertain the friends an guests of one Paolo Almerico, and its design was inspired by pagan temples that Palladio had studied during his travels. So if you want to enjoy a day exploring the Villas of Palladio, you'll have to explore the countryside of the Veneto to discover the true Palladian Villas. 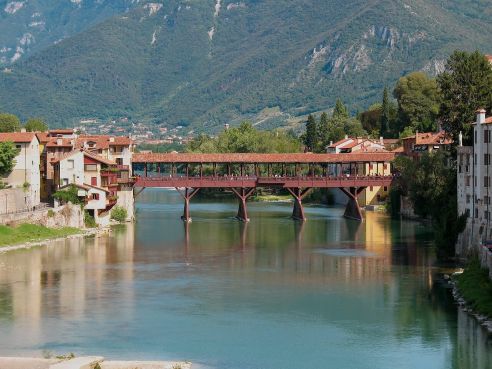