Vicenza: How to Get to the City & its Palladian Villas

Things to see & do in Vicenza, Italy

The city of Vicenza , with a population of just over 100,000 inhabitants has one of the highest ratios of monumental buildings to population in Italy . First settled by the Romans, Vicenza is the official home of Palladian architecture and its city centre reflects the inspirational leadership of Vicenza 's most famous adopted son - Andrea Palladio.

Throughout the cities landscape there are numerous examples of the great architects works that include his Basilica that can be found in the main square of the city surrounded by equally important buildings of different ages and architectural styles in a setting that used to be the home to the ancient Roman forum of Vicenza .

In the adjacent back-streets running directly off Corso Palladio the main street of Vicenza you'll find numerous Palazzi ( Palaces) built by Palladio for the local Vicentine nobility. Buildings from later periods also reflect the influence of Palladio and his architecture, but as you make your way around Vicenza you'll see fine examples of Medieval architecture dating from the ninth century, as well as examples of other periods including fascist architecture from the last century.

While wandering around the enchanting streets of Vicenza you'll quickly realize that the wealth of modern day Vincentines is very much on display through the fine selections of shops that line the streets of the city. The main street of Corso Palladio is one of the most famous streets in the Veneto , and all of the famous Italian designers have stores along this popular thorough way.

Vicenza is also the centre for gold jewellery production in Italy . The province imports more gold than the rest of the country put together. Although, the manufacturers only deal with wholesale enquiries, you'll find examples of the high quality products produced in the area at jewellery stores located under the arches of Palladio's Basilica. In other parts of the city, you'll find designer clothes stores, antique vendors, fine galleries and numerous other interesting stores offering very unique products for sale.

The province and city of Vicenza are located in the region of Veneto in North-East Italy . The climate of Vicenza and its province goes through dramatic changes through the calendar year. In the mountains that rise above the city, the temperatures drop well below zero in the winter months while in the summer the temperatures can reach 35 C / 95F. At only 50 metres above sea-level, and surrounded by mountains and hills, the climate of Vicenza is greatly influenced by the mountains and warm winds arriving from the south. Humidity is a problem during the summer months, which typically brings rain showers in the late afternoons and early evening hours. The winters tend to be cooler with clear skies and less precipitation. Although, the ever-present humidity can create when there is a great disparity between the day time and night temperatures.

How to get to Vicenza

Below you will find listed links to various resources on the web to assist you with information on how to get to Vicenza once you arrive in Italy. Vicenza does not have its own airport, but Venice 's Marco Polo airport is located less than an hours drive from Vicenza .

Most people arrive in Vicenza by train, as its located on the main railway line between Milan and Venice . Milan is approximately two and a half hours by train from Vicenza, while Venice is 40 minutes and Verona twenty five minutes from Vicenza by train. The main railway station of Vicenza is located in the centre of town only a few walking distance from the main street of the city, Corso Palladio.

If you are planning to visit Vicenza by car you'll probably be arriving on the A4 Autostrada (Highway) which connects Milan with Venice . It's best to exit at the Vicenza Est exit, and then, follow the indications for the city centre. If you are planning to visit the city for one-day, arriving by train is probably the most practical choice as the city centre is small and compact, cars are banned from entering the main historical areas, although, you'll find ample parking the outskirts of town.

Like many of the provincial cities of North-East Italy , Vicenza seems to have more bus services than it has people. But, because the city centre where all the main attractions of the city are to be found is so small we recommend you tour the city by foot.

In fact, the city of Vicenza has one of the highest ratios of monumental buildings to population in Italy . Once inside the Medieval quarters of centre of the city you'll be overwhelmed by the beauty and splendour of the surroundings that invite the visitor to explore the cobbled streets lined with elegant shops, where architectural gems by the likes of Palladio are waiting to be discovered.

Tours of Vicenza & the Palladian Villas

There are no regularly organized tours of the city of Vicenza, but the following private tours can be arranged on request:

In the company of a local expert guide enjoy an in-depth exploration of the works of Andrea Palladio. Visit Palladio's celebrated Villa Rotonda and understand why its considered to be the epitome of Palladian architecture. Then, on a guided tour of Vicenza, visit the Teatro Olimpico and see many other Palladian structures as your guide discusses the life and works of Andrea Palladio, and learn how Andrea Palladio became the worlds most influential architect.

An in-depth look at the architecture of Andrea Palladio during the Italian renaissance. Focusing on the province of Vicenza, Italy, this tour incorporates a great variety of works by Andrea Palladio including his Villa Rotonda, Teatro Olimpico, Basilica, Villa Godi, a drive along the famous Riviera Brenta to see the Villa Malcontenta, as well as other lesser known Palladian Villas hidden away in the Vicentine countryside.

Enjoy a private tour of Vicenza and see many famous examples of Palladian architecture. Also included a tour of the Villa Rot 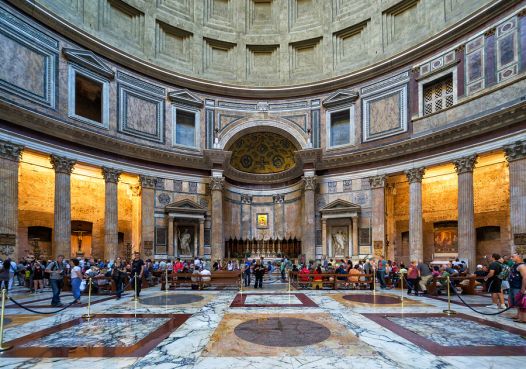 Beyond the Big Three: Experience more of what Italy has to offer...