Rome tourist tour guide to the beautiful Rome fountains that can be found throughout the centre of the city that include the Trevi fountain.

This guide to Rome fountains focuses on some of the more famous and unique fountains of Rome. You could enjoy a guided tour of Rome with one of our Licensed Expert Rome Tour Guides that incorporates many of Rome's fabulous fountains with other important landmarks of the city.

Undoubtedly there is no city in the world that has more waters and fountains than Rome. It has been this way since the Roman times when 11 aqueducts supplied thousands and thousands of litres of water to the city each day.

In the Renaissance the popes decided to renew and beautify the city that had been abandoned for a long time by promoting splendid works such as the building of new bridges, the restoration of the ancient aqueducts and above all the creation of public fountains which, in addition to providing a useful service to the population were extremely decorative.

Monumental fountains also began to decorate the gardens and courtyards of the noble palaces, opening the way to the grandiose decorations of the Baroque period. These ornamental structures when simulating natural settings such as grottoes or waterfalls were named "Nymphaeum" to recall the similar architectural creations which the Greeks and the Romans had dedicated to the cult of the Nymphs. The Villa Guilia possesses a delightful Nymphaeum that greatly influenced Palladio when he designed his own Nymphaeum at the Villa Barbaro, at Maser.

In Baroque Rome, full of surprisingly scenographical buildings, many more fountains assuming original forms and spectacular dimensions were built, such as the Fountain of the Rivers in Piazza Navona, and the celebrated Fountain of Trevi which are featured our Original Rome Walking Tour.

The Fountain of Triton - A Baroque fountain executed in Travertine by Gian Lorenzo Bernini around 1642., the fountain is without doubt one of the most beautiful in the city, especially for the naturalism with which the artist represented the sea monster, half man and half fish, seated on the valves of an open shell. The Triton has a powerful physical build and is shown blowing through a conch.

A tour of Rome would be incomplete without a visit to the Trevi Fountain. The Trevi Fountain is featured on our Original Rome Walking Tour where you'll learn the history behind this important monument, and significance of the decorative decorations, as well as hearing how a local barber influenced the final design of the fountain.

The Trevi Fountain was built between 1732 and 1762, according to a project by Nicola Salvi. The Trevi Fountain is one of Rome's most famous landmarks and typifies the role of fountains in Rome's urban landscape. It's movement which is already audible in the nearby streets as you approach the Piazza, exalts Nature's constant flow in an incessant play of dynamic effects.

The Trevi Fountain was conceived as a large monument set against a pre-existing building and consisting of a rich and animated decoration in addition to the basin. The architectural and decorative elements scenically frame the water that gushes down and collects in the large basin representing the sea.

The Fountain of Books, was built close to the nearby complex of Sant'Ivo alla Sapienza, at one time the seat of the University of Rome, and is decorated by three volumes and a deer's head.

Piazza Navona is home to several beautiful fountains including the Fountain of Neptune, was originally called the Calderai, because of its close proximity to the workshops of the artisans who worked with copper. It remained bare until the 19th Century when it was decorated with the statue of Neptune struggling with an octopus. This fountain is featured on our Original Rome Walk.

The most famous fountain of Piazza Navona is the Four Rivers fountain which is featured on our Original Rome Walking Tour. It was designed by Bernini for Pope Innocent X Pamphilj, who owned a palace on Piazza Navona. Inaugurated in 1651, the fountain represents the four rivers that stand for the four continents known at that time.

According to tradition Bernini carved the arm of the statue lifted up to protect itself from the imminent collapse of the church that had been enlarged and reconstructed by his great rival Borromini.

The fountains of Piazza Venezia are featured on our Original Rome Walking Tour, part of the colossal structure, the two ornamental fountains Fountain of the Adriatic and Fountain of the Tyrrhenian sea refer to the new Italy, united and free.

The Fountain of the Porter is an example of one of Rome's talking fountains. For centuries political satires, known as Pasquinades, written by the Romans to ridicule the authorities were attached to these fountains. 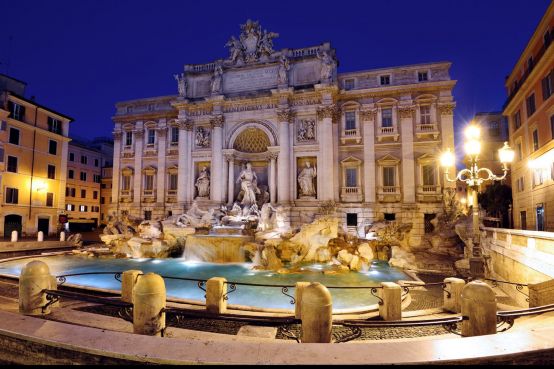 All You Need To Know About The Fontana Di Trevi