To make sure you enjoy a hassle free visit to the Museum sign up for our Tour of the Uffizi Museum that guarantees all participants entrance to the museum without having to stand-in-line courtesy of our pre-arranged reservations.

General Notes on the Uffizi Museum

One of the main attractions and must-see sights for tourists visiting Florence is the Uffizi museum that was originally designed by Vasari in the 16th century to house all the public offices, guilds and court artists of Cosimo de' Medici. Nowadays, what use to be an office building is now home to the worlds greatest collection of Italian and Florentine art.

The Uffizi museum offers the ideal introduction to Renaissance art, as the gallery is arranged to illustrate the evolving story of Italian, and in particular Florentine art through which the visitor on a guided tour of the Uffizi museum can begin to perceive the important role that Florence and its citizens played in the Renaissance movement. The core of the collection of the Uffizi museum was bequeathed to the city of Florence by the last of the Medici, Anna Maria on her death in 1743.

The main galleries of the Uffizi museum are on the top floor accessible by the stairs or elevator. The works of art are housed in series of rooms that number over forty. Because of the extraordinary wealth of the collection housed in the Uffizi Galleries and the sheer number of famous works one visit may not be enough for most people who want to study in detail each of the works on display. In these following pages we have highlighted some of the must-see works of the Uffizi's vast collection that help illustrate the important role played by Florence in the Renaissance movement.

Giotto is regarded by many as the founding father of the Renaissance movement, and in the second room (gallery) of the Uffizi museum we find three versions of the Maesta that were all originally altarpieces in Florentine churches. Giotto's version of the Maesta shows a dramatic break with the traditional rendering of the subject in relation to the other two works on display. The mood of painting is more severe, the setting and volume of the figures express depth and mass.

The third gallery of the Uffizi museum features works by artists from the city of Siena . Of particular note is the work of Simone Martini who was particularly fascinated with foreshortened views and long before Florentine artists like Botticelli had created perspective compositions with a single vanishing point.

In the tenth through to the fourteenth galleries of the Uffizi museum we find the great works of Botticelli which include the Primavera and the Birth of Venus. The Aforation of Magi, also by Botticelli, features portraits of the Medici family: Cosimo il Vecchio kneels at the feet of the virgin, Lorenzo the magnificent stands on the right in a dark tunic, while his younger brother Guiliano stands behind the horse on the extreme left of the painting.

The fifteenth gallery of the Uffizi museum features the Adoration of Magi by Leonardo da Vinci. Although the work is unfinished, as the artist was called away to Milan before completing the painting. The work was full of new expressive and formal ideas which in turn greatly influenced fellow artists such as Botticelli and Lippi.

The twenty first gallery of the Uffizi Museum features Bellini's Allegory. One of the most beautiful paintings on exhibit, its serene order and idyllic view of natural light reflects the hand of the great Venetian master, and introduces the visitor to the new heights reached by the great Venetian painters during the high Renaissance. The works of Titian are featured in the twenty eight gallery of the Uffizi, while fellow Venetian Tintoretto is featured in the thirty second gallery.

The Twenty sixth gallery features the works of Raphael, painted in Florence for the Medici. The works include Madonna of the Goldfinch which shows signs of the influence of Leonardo, and the portrait of Guilio de' Medici who was later to become Pope Leo X. The last of the great Italian artists featured in the collection of the Uffizi Museum are the works of Caravaggio in the form of Bacchus and the Medusa shield. Finally, the works of Caravaggio are getting the recognition they deserve, which seems only befitting to artist who endured such a difficult life.

The works of art on display in the Uffizi Museum are some of the finest examples of Renaissance painting. Enjoy learning more about these precious works and understanding their importance on a guided tour of the Uffizi with a local expert guide.

Enjoy a tour of the Uffizi gallery featuring in-depth discussions of masterpieces by Michelangelo, Da Vinci, & Botticelli and 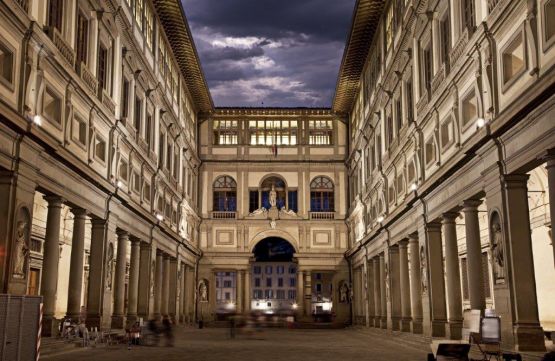