Things to see and do

Read our useful guide about the things that you have to do and see during a holiday in Florence, the pearl of Tuscany.

A city rich in architectural and artistic masterpieces such as Florence offers innumerably possibilities of tourist attractions to visit. Throughout the confines of the civic and religious heart of the city of Florence churches, palaces, museums and other landmarks symbolize the Renaissance and the important role Florence has played in history.

Our small group Original Renaissance Walking Tours offer the perfect introduction to the city with skip the line tickets for Michelangelo's David.

Standing in Piazza San Giovanni, the religious heart of the city, you'll be overwhelmed by the poly-chromed marble façade of the Cathedral of Santa Maria del Fiore, and its imposing dome designed by Brunelleschi. One of the most beautiful things to see in Florence and one of the most important tourist attractions in the city, when it was completed in the 15th century it was the largest religious building in all of Europe.

The building was dedicated to Santa Maria del Fiore (“of the flower”), because the feature lily is the symbol of the city of Florence. Brunelleschi's Dome was an extraordinary feat of engineering, that culminates in Brunelleschi's lantern that is surmounted by a gilded copper ball topped by a cross. Walking the stairs that lead to the lantern across the two vaults is certainly one of the things to do in Florence, because it provides incredibly views of the city of Florence.

Offering another fine view of the city is Giotto's Bell Tower that was built during 14th century and stands in Piazza San Giovanni. The 85-metre high Bell Tower was the creation of three architects; Giotto who designed the tower and died during its construction, Andrea Pisano who continued after Giotto, and Francesco Talenti, who built the last three levels. Not much to add: this building is one of the best things to see in Florence!

Alongside Giotto's Bell Tower and the Cathedral of Santa Maria del Fiore you can find the Baptistery. Another important tourist attraction of Florence, the Baptistery is dedicated to St. John the Baptist, who is the patron saint of Florence. The baptistery is famous for its bronze doors, of which the east facing door Michelangelo nicknamed it the "Door of Paradise".

Hidden away on the backstreets of Florence you'll find the Bargello Museum. One of city's less-frequently visited museums, but certainly one of the things to see in Florence, it provides many insights into the history of Medieval Florence and the Renaissance movement. Another highlight of the museum is a delightful chapel accredited to Giotto.

One of the major sightseeing attractions of Florence is the Accademia Gallery which is home to a very important collection of Florentine paintings, dating from the 13th to the 18th centuries. Nowadays it's more famous for being the home of Michelangelo's David which was moved here in 1873: admiring this authentic masterpiece is one of the things you have to do in Florence! For many visitors this statue is the symbol of the Renaissance movement in Florence. As for the Uffizi museum, reservations are strongly recommended.

While Piazza San Giovanni is the centre of religious life in Florence, Piazza della Signoria is the political and civic centre of the city. This square features famous tourist attractions such as the Palazzo Vecchio, the nearby Uffizi Museum and a delightful sculpture garden.

Palazzo Vecchio is a monument of exceptional artistic and historical importance: for centuries the palace was the political centre an symbol of the city. Now a museum, the building houses works by Vasari & Micheelangelo: visiting Palazzo Vecchio is one of things to do in Florence, that’s for sure.

Uffizi Museum is probably Florence's most visited tourist attraction and features works by all the great Renaissance artists of Florence, as well as masterpieces made by other world-renowned artists. It’s the oldest museum in Europe, since it was created from the core of the Medici art collections in the late 16th century. The museum houses over 1600 pieces of art, that are exhibited in 45 rooms of the previous Medici’s Palace.

Ponte Vecchio is the most beautiful of the bridges that cross the River Arno as it flows through the city of Florence. Its original structure dates from Roman Times, and the sides of the bridge are lined by gold & silversmiths’ shops. It's a popular tourist attraction because of the views it offers from the central part of the bridge: include Ponte Vecchio among the things to see in Florence, you won’t regret it! On the Oltrarno side of the Ponte Vecchio you can also see the Medieval Mannelli Tower.

After crossing Ponte Vecchio you'll arrive in Oltrarno, Florence's left-bank, which offers some interesting tourist attractions. The backstreets of this part of the city are famous for their innumerable artisan workshops, as well as delightful and authentic restaurant and wine bars.

The area is also home to the Boboli Gardens and the Pitti Palace, whose gardens offer fine views of Florence: this is another thing to see in Florence. Pitti Palace features some important galleries and museums, including the Palatine museum, which features works by Raphael, Caravaggio and Rubens, a gallery of Modern Art, a silver museum and a costume gallery. 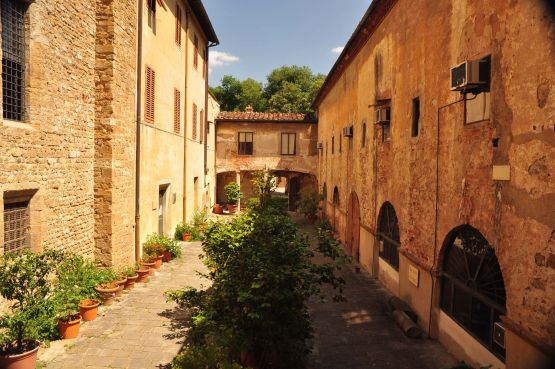 Five Cool Things To Do in Florence on Your Summer Vacation