Dolomites: Travel Guides & Other Info Like How to Get to

Tourist guides and information on Dolomites mountains in Italy include the weather, how to get to the them, all the tours of the Dolomites and a lot of things to do in these spectacular mountains. As well as other tourist information to assist you planning how to spend your time on the Dolomites.

Introduction to the Dolomite Mountains, Italy

The Dolomite mountain range is Italy's most dramatic and beautiful range of mountains. It's also Italy 's most accessible range of mountains. It's cragged and jagged peaks are accessible through one of the most complex systems of hiking trails in Europe. With the assistance of numerous cable-cars, chairlifts and Gondolas, its awe-inspiring beauty is well within the abilities of all levels of walkers and hikers.

The system of trails within the Dolomites provide walking routes that start with easy walks of two or three hours, to the more extensive trails that provide excursions that can last several days. The trails vary greatly in level of difficulty: easy hikes traverse alpine meadows while the high altitude hikes involve routes through which hikers are able to scale the highest peaks by utilizing iron cables hammered into the mountains faces, or through tunnels excavated during the First World War.

The Dolomite mountains came into existence when the continents of Europe and Africa collided tow-hundred million years ago, pushing up the previous low-lying tropical sea above the rest of Italy . The mountain range is primarily made up of two types of Limestone: Calcium carbon limestone and Calcium magnesium carbon limestone ( Dolomitic Rock).

These types of stone are very weak and fragile, and when the glaciers of ice-age passed through the mountain range they carved to soaring peaks and deep verdant valleys that now characterize these chain of mountains. Punctuated by glaciers, emerald green lakes and lively mountain villages, the Dolomites offer an ideal destination all-year-round. In the winter months skiing is the big pastime o the mountains, while in the high summer hiking, mountaineering an mountain biking take over as the principal activities.

The Dolomites are named after a French geologist "Dolomieu", who was the first scientist to analyse the geological history of the mountains in the 17th Century. Originally, the Dolomites were called the " Pale Mountains", as according to a local legend about a Prince who lived in the mountains and who wished to travel to the moon. One day his wishes were granted and while on the moon he fell in love with the princess of the moon.

After marrying they returned to the mountains, but after a couple of years the princess pined for pale mountains of the moon. Unfortunately, the prince could not take her back to he moon because if he did he would go blind. But, he had the good fortune to meet a group of homeless gnomes who in exchange for a home in his kingdom weaved rays of the moonlight into a fine gossamer that they covered the mountains with to create the pale colour the mountains are no famous for, and so the prince and the princess lived happily ever after.

Nowadays, these same pale mountains magically change colour throughout the day depending on the intensity of light. A few minutes before sunrise and a few minutes after sunset on a clear day you may be able to witness the "Alpen Glow" where the mountains turn purple in colour for a few minutes.

The mountains have numerous legends related to their form, as well as intriguing stories related the First World War when the front-line between the Italians and the Austrians ran right through the highest peaks and mountain passes of the Dolomites.

Man has been present in the mountains since the 2nd Century BC, when Celtic hunters from the north began to build settlements in the Dolomites. Today, the people of the Dolomites live in harmony with their environment, and development within the chain of mountains is strictly controlled by local family communes whose origins date back the times of the Longobard rule of Italy . Even famous ski resorts like Cortina D'Ampezzo & Val Gardena retain their village like atmospheres that till enchant visitors to the Dolomites.

Since 1956, when Cortina hosted the winter Olympic Games, the fortunes of the local people changed dramatically as quickly realized that tourism was where their future lay. In the following years they have developed their precious mountains to offer a vast variety of outdoor activities that make the Dolomites an ideal destination for adventure travellers.

Weather in the Dolomites, Italy

The Dolomites are usually warmer and receive less precipitation than the Alps. As in all mountainous areas, the weather can change suddenly and its can vary greatly between regions within the Dolomites. Typically bad weather arrives from the South, while winds from the north usually bring good weather.

Typically the south and south-western areas of the mountains have more foggy days as they are close to the warm Venetian plain and the Adriatic Sea . The northern sections of the mountains generally receive less precipitation as storms arriving from the south generally loose most of their moisture before arriving in he northern sections of the Dolomites.

In the summer, from mid-June to early August, days are pleasantly warm with cool nights and the occasional storm. September tends to be clear and fairly warm with good consistent weather through to the middle of October. Snow begins to arrive around the end of December continuing through March, although, snow at higher altitudes can arrive all year round.

How to get to the Dolomites, Italy

By car from Milan it would take 4 hours to drive to the mountains, from Munich 3 and a half hours and Venice an hour and a half. You can also reach the Dolomites by train on the main line crossing the Brenner Pass and connecting Austria with major Italian cities. For information on roads and driving in Italy.

The Fortezza train station would be the ideal departure point for people wanting to visit the northern section of the Dolomites, while Bolzano would probably be the most convenient for the southern parts of the mountain range.

Getting around the Dolomites

Once inside the Dolomites you'll find a dense network of local roads that make it very easy to move around by car to all the major points of interest of the mountain range. The mountains also boast a very extensive bus network that is particularly useful during the summer months when access to many of the trails is provided by a regular schedule bus service. There are also numerous private taxi companies that offer specialized services that can assist walkers who need to get to isolated walking routes.

Tours of the Dolomites from Venice

Small Group Day Tours of the Dolomite mountains depart on a daily basis from Venice . Enjoy an intimate experience of the Europe's most beautiful range of mountains on a fascinating tour that incorporates all the major attractions of the mountains. From the soaring peaks to the Emerald green lakes and lively mountain villages you'll enjoy a thorough exploration of these enchanting mountains. 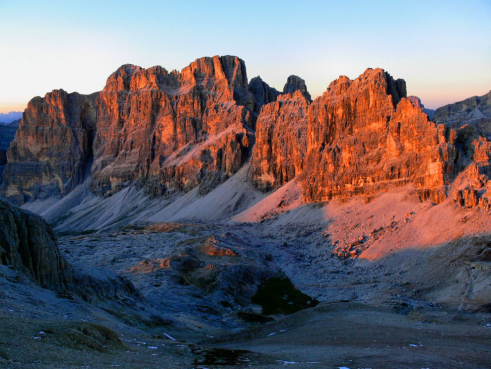 The Dolomites: 11 Mountainous Experiences in Italy

How to Spend Three Days in The Dolomites This Winter