Since Roman Times, the city of Rome has always been characterized by the presence of vast green areas. The Eternal city boasts numerous Villas and Gardens worth visiting during your stay in Rome!

Since its most ancient times, Rome has been characterized by the presence of vast green areas. Following the presentation of the Greek culture in the 2nd Century B.C. it became the vogue for rich and illustrious Romans to attach their names to sumptuous gardens, called Horti. These fell into decline with the crisis of the Roman Empire, and only a thousand years later during the fervor of the Renaissance did they become one of the most concrete symbols of the return of classicism.

Today, the city is still able to offer numerous hectares of land used as public parks and gardens, where it is possible to take pleasant walks, immersed in mother nature. The Villa Doria Pamphilj, with over 180 hectares of land, is the largest of the Roman villas. Built by a nephew of the Pope Innocent X, was constructed on this site, because it lay near the Vatican, the presence of water and the quality of the air.

An underground passage was constructed linking the Villa to the Vatican. Along the sides of the garden it's still possible to see the arches of the aqueduct built by Emperor Trajan in the 2nd Century and restored by Pope Paul V in the 1600's.

At the point where the aqueduct crosses the road, there is an arch nicknamed "tiradiavoli" (devil puller), because according to legend it was here that the carriage driven by devils and carrying the ghost of the sister-in-law of pope Innocent X, Olimpia Maidalchini would pass-by.

For plant lovers, visit the "Orto Botanico", these botanical gardens originate from the garden for the cultivation of medicinal plants created in the Vatican by Pope Nicholas III in the late 13th Century- The present-day gardens were established in 1883 and contain over 3,500 cultivated species. One of the gardens focal points is the enormous plant-tree that is 300-400 years old.

The municipal Rose Garden, one of the most beautiful in the world, also thanks to the scenic context in which it stands, was once the cemetery for Jewish community in Rome from 1645 to 1934, the year it was decided to change it into a public park. The rose garden was founded in 1950, and it still reflects its Jewish heritage in the shape and form of the central staircase that is in the form of a seven-branched candelabrum.

Rising up above the city, and affording magnificent views of Rome is the Promenade of the Janiculum. Created in 1880, and dedicated to Guiseppe Garibaldi. From this point you can really admire the numerous gardens and countryside that seems to permeate every part of the city. Every day at noon, the hour is announced by the firing of a cannon.

The Villa Sciarra, is also a haven for plant-lovers. In the 19th Century, owners Mr and Mrs Wurts transformed the park into a true paradise, full of rare plants and embellished with an original sculptural decoration coming from an 18th Century Lombard villa. This enchanted place charmed and fascinated Gabriele D'Annunzio, who used the location for one of his books.

The Garden of Orange Trees, was created in 1932 in commemoration of the Spanish orange tree brought to Rome by St. Dominic in 1220. This tree, according to tradition was the first planted in Italy, still miraculously exists in the garden of the monastery of Santa Sabina and can be seen through a hole in the wall of the church portico.

Above the Piazza del Popolo lies the Pincio, the first public garden planned in Rome as desired by Napoleon. It leads into lovely open park-land, where delightful views of Rome abound, and you'll discover delightful villas that give a true sense of the countryside in Rome, the Eternal city. 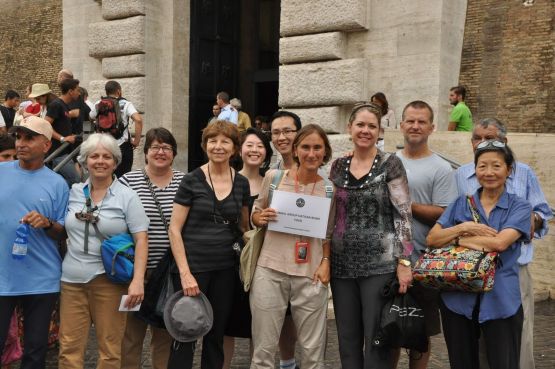