“After having repeatedly examined my conscience before God, I have come to the certainty that my strengths, due to an advanced age, are no longer suited to an adequate exercise of the Petrine ministry.” —Pope Benedict XVI

When Pope Benedict XVI, leader of the world’s 1.2 billion Roman Catholic Christians, announced February 11, 2013 in Latin his intent to resign (translated by Vatican Radio into English here) by February 28th it was a surprise to most people in the world. He is the first pope to resign in almost six centuries.

Hahn, a Presbyterian convert to Catholicism who teaches theology at the Franciscan University of Steubenville in Ohio, wrote that in April 2009 Pope Benedict XVI visited Celestine’s tomb: “After a brief prayer, he left his pallium, the symbol of his own episcopal authority as Bishop of Rome, on top of Celestine’s tomb! … Fifteen months later, on July 4, 2010, Benedict went out of his way again, this time to visit and pray in the cathedral of Sulmona, near Rome, before the relics of this same saint, Celestine V.”

“In the year 1294, this man (Fr. Pietro Angelerio), known by all as a devout and holy priest, was elected Pope, somewhat against his will, shortly before his 80th birthday (Ratzinger was 78 when he was elected Pope in 2005). Just five months later, after issuing a formal decree allowing popes to resign (or abdicate, like other rulers), Pope Celestine V exercised that right. And now Pope Benedict XVI has chosen to follow in the footsteps of this venerable model.”

“I am just a pilgrim who is starting the last part of his pilgrimage on this earth,” he said. The retired Pope, now officially known as “pontiff emeritus,” left by helicopter for the papal residence Castal Gandolfo outside Rome. He intends to stay there for a few weeks before retiring to a small monastery within the grounds of the Vatican where he wants to live out his days in prayer and study.

The Pope’s apartment in the Vatican is closed, the entrance sealed to prevent tampering of any contents. The seal will only be removed when the new pontiff enters. Further, the symbolic Fisherman’s Ring and papal seal are destroyed with a small silver hammer.

In the age of social media, Pope Benedict XVI’s Twitter page is now inactive, reading simply, Sede Vacante (empty seat). Catholics are speculating who will become the new pope, with many believing it may be someone outside of Europe this time. Many believe it is opportune that the new pope will be elected during Lent, the time when Christians are fasting and preparing for Holy Week and Easter.

Until the new pope is elected by the College of Cardinals, the chamberlain – Cardinal Tarcisio Bertone, the Vatican’s Secretary of State – is in charge. The dean of the College, Cardinal Angelo Sodano, will prepare a special meeting of cardinals eligible to elect the new pope called a conclave.

The Conclave, a secret meeting of the College of Cardinals, is traditionally held inside the Sistine Chapel.

Any cardinals younger than 80 may participate. For this conclave that will be reportedly about 117 cardinals from around the world.

The deliberations typically last several days, with two ballots a day, and will take as long as necessary. When Cardinal Joseph Ratzinger was elected Pope Benedict XVI it took only two days, which was one of the fastest decisions in history.

The Conclave is secret and the cardinals may not have contact with outsiders and are disconnected from media.

The cardinals vote and cast their ballots at the front of the Sistine Chapel. The ballots are pierced to ensure they are only counted once each.

While Pope John Paul II had changed the conclave process to allow a slight majority of votes to elect the new pontiff, Benedict changed the requirement to now two-thirds of the vote.

When the Conclave has chosen the 265th successor to St. Peter, white smoke will waft from a special chimney in St. Peter’s Square to indicate there is a new pope.

Bookies in England are accepting wagers on which cardinal will be elected pope, and there is even an online campaign encouraging Catholics to spiritually adopt a cardinal, praying for the cardinal randomly assigned to them throughout the Conclave process.

Many are hopeful that the new pope will be celebrating Mass at the Vatican during Holy Week and Easter this spring. One thing is certain: Until the white smoke appears at St. Peter’s Square the world will be watching and waiting to see what happens the next few weeks in Italy.

Travel and tours during the Conclave

Due to the conclave for the election of the new Pope, the Sistine Chapel and St. Peter’s Basilica will be closed during these events. Starting from March 4 and until the new Pope is elected, our small group Vatican tour will last 3 hours at a reduced rate that you will see on our our Vatican Tours Page (59 Euro per person.) During this period your guide will hold a lecture on the Sistine Chapel in the yard inside the museum using interactive and visual tools. The lecture will include in-depth information about the election of the Pope and the Conclave process. Raphael rooms and the Pinacoteca, with famous works by Caravaggio and Raffaello, will be included. 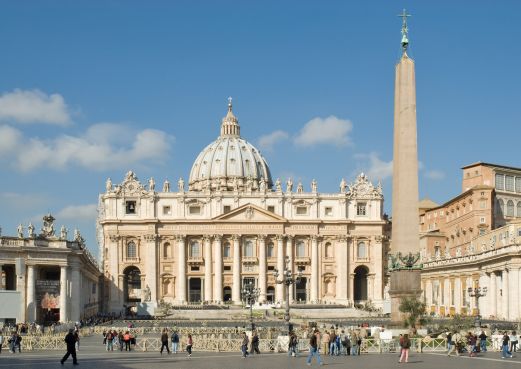 Facts You Didn't Know About The Vatican