Since 1972 the United Nations Educational, Scientific and Cultural Organization (UNESCO) has been compiling a list of the world’s most significant cultural and natural sites - and you can see many of them when you book our Italy Tours and Italy Vacation Packages.

It’s true! The Bel Paese (Beautiful Country) is the place to be for art, architecture, and landscape.

Italy boasts more destinations on the UNESCO list of World Heritage Sites than any other country, with well over 50 exceptional vacation experiences in Italy that are considered uniquely important and deserving of protection. Some of the most popular Italian UNESCO sites you may like to include on your Italy holiday itinerary are:

See the spectacular Dolomite Mountains. Aside from world-class skiing there are spectacular viewpoints and unique rock formations to see as you ascend these famous peaks.

The Cinque Terre! Strung across the beautiful hillside overlooking the Mediterranean you find five unforgettable Italian fishing villages overlooking a marine area that UNESCO has declared a World Heritage site.

Crazy about fine art? Make sure to see the dazzling Byzantine mosaics that have survived the passage of time and two world wars in what was once a bustling port city, making Ravenna a must-see stop for art enthusiasts.

The the ancient ruins of Pompeii make up the eerily excavated site of the Roman city stopped in time when Mount Vesuvius erupted in 79 AD. There's a reason this spot is so popular for Italy visitors -- it's truly magical!

The stunning Amalfi Coast, which made the list for its outstanding Mediterranean coastline as well as the notable architecture and art found in the charming towns that adapted agricultural practices to the mountainous landscape, is a must-see too.

The City of Vicenza and the Palladian Villas of the Veneto are enchanting examples of uniquely designed country houses dating back to the 1500s with incredible manicured gardens and important examples of Italian art.

The City of Verona! While it’s best known by many as the setting for Shakespeare’s Romeo and Juliet, Verona features well preserved examples of significant architecture dating back 2,000 years.

The Leaning Tower of Pisa is on the list too, and is actually not just considered a medieval masterpiece for its leaning tower, but also for the cathedral, baptistry, and cemetery.

And don't miss Venice, the city of canals, and its Lagoon. Romantic, scenic, and historically significant, Venice is a fascinating city to explore.

In June of this year three distinct geographical areas in Italy were added to another prestigious UNESCO list: The World Network of Biosphere Reserves, which are where sustainability practices ensure the conservation of unique biodiversity. The trio of top Italian biospheres that made the list include:

- The Po Delta Reserve, the only delta in Italy, with river branches, sand dunes, and lagoons among the unique biodiversity covering approximately 139,398 hectares in the Emilia-Romagna region
- The Appennino Tosco-Emiliano Reserve, 223,229 hectares found on the border between Emilia-Romagna and Tuscany, with roughly 70% of all species of Italian wildlife living here including birds, amphibians, reptiles as well as a wealth of botanical specimens
- The Ledro Alps and Judicaria Reserve, comprised of 47,427 hectares of pristine Alpine meadows and forests between the Dolomites and Lake Garda.

Which UNESCO sites would you like to include on your Italy itinerary? Avventure Bellissime can help: Visit us online now to build your Italy vacation packages. 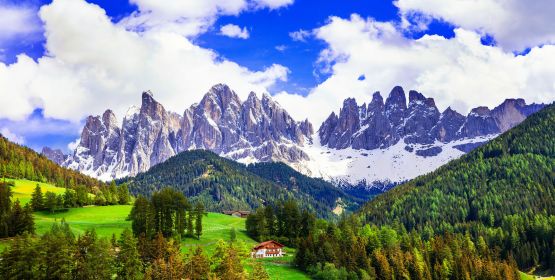