St Mark's Square is the heart of Venice and the first stop for most first-time visitors to the city of Venice as it is home to many major monuments. Piazza San Marco is a fascinating place day or night, and leaves visitors spell-bound by its beauty and elegance.

St Mark's square in Venice was described by Napoleon as the most beautiful dining room in Europe. It is the only true square of Venice. Dominated by it's Byzantine Basilica of St. Mark's that's a unique architectural masterpiece that is some 175,5 metres wide whose form closes one side of St. Mark's Square. For further information on St. Mark's Basilica.

Facing St. Mark's Basilica with your back to Piazza San Marco, to the right is an opening to sea and the bay of San Marco which in the old days was the main entrance to the city as visitors in those days arrived by sea. Two giant columns form a mock entrance gate to the city one crowned the ever-present winged Venetian Lion the symbol of the Venetian Republic, the other St. Theodore. In previous the Dolo, as this are is known was were public executions took place.

Coming back to the square you will see the Campanile, bell tower of St. Mark's square that has dominated Piazza San Marco since Medieval Times. In its original form it first served Venice as a wooden look-out tower. Constructed of wood it was vulnerable to lightning strikes and after fires it was decided in 1549 to build a stone bell tower that was designed by the great Venetian architect Sansovino to house the "arsenalotti guards".

The ‘campanile' bell tower is 98m60cm high. In 1902 the campanile collapsed luckily with no victims apart from the caretakers cat and Sansovino's ‘Logetta'. However it was reconstructed immediately with the help from foreign financial help and was ready for the 25 April 1912,

On the opposite side of St Mark's square to the bell tower you will find the Torre Dell'Orologio - Clock Tower. The ‘Torre dell'Orologio' was built between 1496 and 1499 to hold the large blue clock with golden decorations to represent the signs of the zodiac.

The clock indicates the time as well as solar and lunar phases used to calculate the tide, in order to know when it was favourable to set sail. At one point the deterioration led to the clock stopping completely. It's restoration was with financial backing from Piaget (famous watch makers).

Other buildings of note that line Piazza San Marco, and make St. Mark's square such an incredible attraction include "La Libreria Sansoviniana' was built between 1537 and 1588 and houses the 900 volumes left to the city by Cardinal Bessarione in 1468. It would also have housed the inheritance left to Venice by Petrach if it hadn't been stolen.

Venice's most celebrated architect was again commissioned to build the library which featured an intricate facade. The architect made an error in the design and when the facade collapsed after its construction, Sansovino spent some unpleasant months in prison as a punishment.

At the opposite end of Piazza San Marco, facing St. Mark's Basilica, there is the ‘Procuratie Vecchie' where the powerful prosecutors of of the Venetian Republic lived. Designed by Mauro Codussi and finished at the first half of the 16th Century, the Napolean's wing was built in 1810 and today houses the Correr Museum which overlooks St marks square. The neo-classical rooms built on the wishes of Napoleon, which after the fall of the Venetian Republic, became the royal palace of the French.

On two-sides of Piazza San Marco, facing each other are cafes where you can sit in the splendor of the most beautiful drawing room in the world. In the evenings, each cafe boast orchestras that entertain their clientele and passerbys. There is quite a competition between the orchestras as they challenge each other for the attention of the tourists. 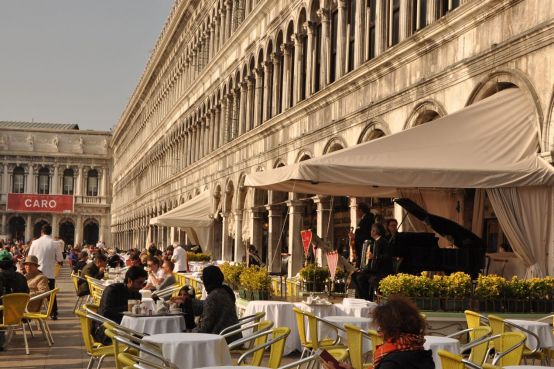