Wine has been produced in the Valpolicella wine region near to Verona since Roman times. During this period, the unique style of production that the makes the Amarone such a revered wine was introduced to the area.

In ancient times, the Romans in the south of Italy left the grapes on the vines allowing the juice to turn to sugar through which they were able to produce a fortified wine that would withstand the rigors of travel in those days and also the challenges of the pungent and spicy cuisine of the Roman diet. In the cooler north they were not able to leave the grapes on the vines, so they stored the grapes in barns allowing them to dry before pressing them. This same method is used today in the production of the Amarone in the Valpolicella wine region of Italy.

Until recent times the main wine of this region was the Recioto, a sweet red wine which was particularly popular with the Veronese in days when sugar and sweets were not widely available. This sweet red wine was ideal served with dry cakes as a dessert wine. The Amarone is sometimes referred to as the failed Recioto, as the fermentation of the sweeter wine is halted to leave sugar to provide the sweetness. While the Amarone is fermented for a longer period to produce a dry and full-bodied wine that has enabled the Valpolicella wine region to become one of the most famous wine regions in Italy.

For many centuries, the Amarone lived in the shadow of the Recioto until 1990 when wine buyers were desperately searching for new full bodied red wines. In 1990, Amarone enjoyed an exceptional vintage through which it was catapulted to fame almost overnight. Nowadays, you'll find Amarone every present on wine lists of fine restaurants, and wine shops around the globe along with other wines from the Valpolicella wine region

Like the famous wines of Bordeaux, the wines of the Valpolicella are made from a blend of these indigenous vines. Each vineyard, has its preference in regards to the types and quantity of grapes used in the production of their wines. In fact, as you travel through the wine region from one vineyard to another you'll be amazed by the subtle differences that exist between each vineyards version of the Amarone.

A fascinating exploration of the Valpolicella wine region that focuses on the great Amarone awaits you on our Valpolicella Wine Tours.

Enjoy two full wine tastings and tour each of the famous vineyards with a local expert guide, as well as a casual wine tasting at a third vineyard. Along with a delightful lunch at a popular local restaurant a wonderful day awaits you in the Valpolicella hills.

Enjoy a private Wine tour departing from Venice and featuring the famous Valpolicella wine area , home to the prestigious Ama 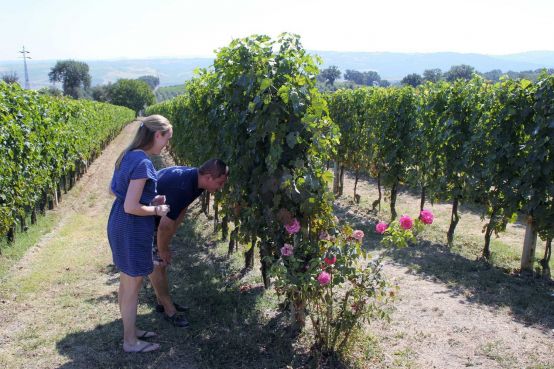