The history of Ostia Antica stretches far back in time: according to tradition, although not yet confirmed, to the 6th Century B.C., when it was founded by King Ancus Martius as the first Roman colony.

In reality, the oldest remains of Ostia only date back to the 4th Century B.C. and belonged to the first fortified citadel. The name Ostia comes from the Latin "ostium", meaning mouth of the Tiber.

For a long time Ostia was Rome's only river port, where large freight ships that arrived here had unload their cargo onto smaller boats that were able to go up the river to Rome. The barges, drawn by long lines of buffalo moving along the banks, reached the harbor of Forum Boarium, located near the Isola Tiberina.

The inhabitants of Ostia were merchants, ship owners, craftsmen, laborers, freed-men and slaves of different languages and religions. Ostia's cosmopolitan nature can be seen in the sanctuaries, temples and shrines dedicated, to the local gods, as well as to the Eastern ones, mainly Persian, Phrygian and Egyptian.

The excavations of Ostia are quite extensive and more than rival those of Pompeii.

The site boasts numerous marvelous mosaics, many of which are still perfectly preserved, that decorate the pavements provide us with a goldmine of information on the cities with which Ostia carried on trade, on the goods dealt with and on the guilds working at the port.

For a delightful panoramic view of the site, venture up the steps of the theatre, founded in the age of Augustus. 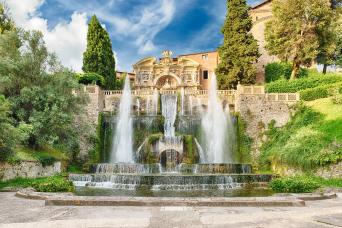