The Roman Colosseum is probably the most famous monument of Ancient Rome in the eternal city. A large percent of the structure still remains intact today.

The symbol of the Roman Empire, the Roman Colossseum was built in a valley upon an area of artificial lake that at one time belonged to the ‘Domus Aurea', Nero's imperial palace. Originally named the amphitheatre Flavio, it was commissioned by Vespasiano in 72 DC who ordered the construction of the largest amphitheatre in the roman realm. It acquired the name the Colosseum only in medieval times possibly because it was situated near the giant (colossal) 20m statue of Nero.

Despite damage to the Roman Colosseum caused by fire, earthquakes and looting it has resisted to the passing of the centuries and even today it's huge size is still impressive. In the past it would hold up to 70,000 people who watched gladiator battles, the hunting of animals, and naval battles (naumachie) .

Inaugurated in 80 DC by Tito, son and successor of Vespasiano, it's opening ceremony lasted 100 days during which people saw great fights, shows and hunts involving the killing of thousands of animals.The marble oval of the Roman Colosseum is 188m long and 156m wide with 76 entrances. It was built from brick and concrete, the exterior facing in travertine whilst the interior with marble.

Built upon three very distinct levels of arcades: Doric, Ionic and Corinthian. The arcade is topped by a wall embedded with half Corinthian columns and window openings. The fourth level of arcades has been designed like an attic highlighted by Corinthian pillars and by a square window for every two compartments.

At one time the pillars supported the huge ‘velario' awnings which shaded spectators from the sun. What we see today is only a skeleton of what was the greatest arena in the ancient world, three quarters of the outer surrounding wall are missing.

Access to the Roman Colosseum was very precisely controlled. The four main doors were exclusively reserved for the privileged. All the archways of the first level were numbered which corresponded with the number indicated on the entrance tickets (tesserae) so that spectators could easily find their seats.

A precise system of arcades from which they could arrive at stairways and ramps to ensure rapid access to every gallery and seat as well as in the case of emergency, a rapid evacuation of spectators.The tiered seating area (cavea ) of the Roman Colosseum was divided into five overlapping sections.

Entrance was free but each sector was assigned according to the social group of the people based on the rigid social hierarchy decided by the Romans. Members of the senate sat in the seats closest to the arena, whilst up towards the attic the podium with the imperial box was reserved for the emperor and his family, officials of state and priests.

The second sector was for knights, whilst the third and fourth for other social classes. The highest up sector with wooden benches was reserved for women (all other sections had stone benches.)

Within the wooden boarded dungeons of the Roman Colosseum arena (78 x 46 metres), were present changing rooms, cages for the wild beasts and weapons. Gladiators and wild beast were raised to the level of the arena.

All types of scenery that served to create the staging such as a background of hills or forests, could be brought into the arena via inclined floors with a rotating belt system and moved by counter weights.

Until 523 DC the Roman Colosseum served to satisfy the roman populations need for ‘panem et circenses (bread and circus like games). The last such games took place under King Teodorico (473-526 DC) During medieval times the coliseum was completely abandoned. Damage caused by numerous earthquakes had left it little more than a rubble heap.

It was transformed into an enormous marble, lead and iron quarry as materials were repeatedly used for building of fortresses, churches and palaces. Threatened with demolition by Sixtus V for town planning reasons. Only a prophecy of the Anglo-Saxon priest Beda remembered the antique splendours of one time. He stated that as long as the coliseum remained standing so too would Rome, if the coliseum fell so too would Rome, if Rome perished it would mean an end to the world.

During medieval times the Roman Colosseum was transformed into the fortress of the family Frangipani. Only in 1744 was it protected from looting when it was transformed into a commemorative monument of Christian martyrs and a bronze crucifix erected. Declared a sacred monument dedicated to the passions of Christ by Benedict XIV. 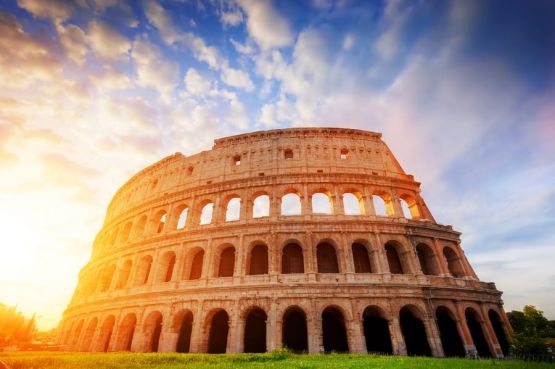