The Pantheon : Different Tours in Rome and a Long History

The Pantheon in Rome, Italy is one of the best preserved of the Ancient buildings of Rome. Construction started in 27 BC by the statesman Marcus Vipsanius Agrippa and was later rebuilt by the emperor Hadrian.

In the square Piazza della Rotonda is erected one of the best preserved and enchanting constructions of Ancient Rome: the Pantheon. It was built in 27 BC according to the wishes of Marco Agrippa son-in-law of emperor Augustus to glorify the sovereign family and was the first temple built for the common people. Augustus refused it's consecration and very modestly had his statue placed at the entrance.

The Pantheon is featured in numerous tour itineraries offered by Avventure Bellissime in Rome, including our popular small group mini-van Tours of Monumental Rome

The building acquired the function of Pantheon (commemorative monument). How it acquired it's name is not sure. Maybe the temple was consecrated to the gods of the planet, above all Mars and Venus, protector goddesses.

The shape of the dome (cupola) could have some representation of the goddesses hinting at the heavenly face with the central round opening for the sun. After the fire of 80 AD, emperor Adrian had a new building constructed between 118 and 125 which is the version of the Pantheon you see today.

This majestic architectural masterpiece demonstrates the technical capacity of the roman architects and it was later used as a model for artists of the renaissance such as Bramante and Michelangelo.

The Pantheon was saved from destruction only because the Byzantine Emperor Foca donated it to pope Bonifacio III in 608 that one year later on the 1st November, and had it transformed into the church dedicated to St Mary and the martyrs.

Over the centuries earthquakes, floods and demolition had damaged it's construction, but each time was restored. In 663 emperor Costante II had taken to Constantinople the bronze tiles from the roof .

Pope Urban VIII from the Barberini family decided to move all bronze covering the ceiling and use it for other purposes. He had the bronze covering of the beams melted down in order to make 80 cannons for the papal fortress of castle Sant'Angelo. While the rest was used for the creation of the masterpiece the baldachin of St Peter's which overhangs the papal alter in the centre of the basilica.

The Pantheon was conceived as a Greek style ‘pronao' (columned entrance) and cylindrical body built entirely of brick with niches carved into it's 6.20m thick walls. The rectangular ‘pronao' was held up by 16 imposing granite columns that are more than 14 m high. In ancient times when the road surface was much lower, an external flight of stairs surrounded by porticos led from the square to the columned entrance with three aisles, in front of which were eight granite columns.

At the end of the columns is the entrance, a gigantic bronze door. In antiquity all the walls were covered in marble whilst the dome was covered with slabs of bronze and every niche held a statue, but today the walls are bare.

The dome gives an image of a celestial face. It is the largest dome that has ever been made from brickwork. Inside it is decorated by five structures of panelled ceilings that at one time were bronze covered. The circular opening is almost 9m wide across which the light uniformly falls inside.

When entering the Pantheon there is an immense empty space. The space is a perfect sphere symbolising the vault of heaven. It's height is the same as it's diameter (43.20m) creating perfect balance and unique harmony. It is round so as to place all gods at the same level of importance.

The pavement is made up of both square and circular marble slabs, the same marble used in the architectural decoration. All around are 7 splendid niches between 2 Corinthian columns where every niche held a statue. These statues represented the seven gods linked to worship of the planets but have been substituted over the course of the centuries by alters and Christian funeral monuments.

The niche in front of the entrance stands out from the rest due to it's great size and it'd different framing. Above this section is the attic, whose original form today can only be seen in a small line that has been reconstructed in place of the plaster decoration of the XVIII century.

The Pantheon was also a mausoleum, resting place of the royal family and some great renaissance artists, such as Raffaello, whose tomb today is one of the most visited within the church. His remains were lain to rest inside an ancient tomb upon which is the ‘Madonna del sasso' by Lorenzetto and commissioned by Rafaello for his own tomb. 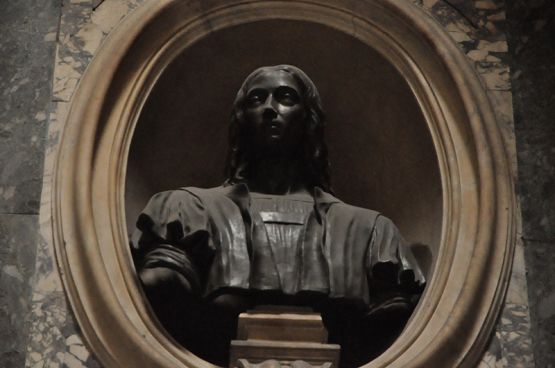