Fantastic Walking Tours in Rome, amongst Forums and Ruins

Initially it was a marshy valley where the dead were buried, but due to it's central position the surrounding areas became the natural hub of the city when the population moved to the hills. The beginning of it's history coincides with the reign of the Tarquini.

The first king Tarquinio Prisco ordered the building of several public constructions but above all a large sewer system for the drainage of the valley's deep bog. From this moment onwards, the area under Campidoglio, to be known as the Ancient Roman Forum was divided into two parts, both with precise roles.

The northern part of the Ancient Roman Forum was occupied by the ‘comitium' (square of meetings) where political reunions and the main celebrations of the city took place. During the beginning of the Republic, the ‘Curia'(senate hall) was erected where the members of the senate met.

It was the most important political organ of the republic in charge of all affairs of state. The ‘Rostra' the orators platform was also erected.

The southern part of the Ancient Roman Forum was where the market place was located and farmers and traders offered their goods and exchanged services. The Forum was also the place of worship of gods. Amongst the oldest temples are ‘Saturno', Dioscuri', and the ‘Concordia'.

Other sacred places include the round temple ‘Vesta' on the outskirts of the ancient Forum and home of the 6 Vestal virgins, and the ‘Regia', official residence of the supreme priest ‘pontifex maximus'.

The real development of the Ancient Roman Forum occurred in the II century after the Punic wars and the conquest of the eastern Mediterranean that resulted in Rome becoming the most powerful city of the era. Within a short space of time the appearance of the city changed drastically, several basilicas were erected for use during bad weather to administer justice as well as economic agreements.

The ‘Tabularium' (Roman record office) was constructed at the beginning of the I century, when a splendid wing was added to the square. It was therefore the start of the creation of a new organic structure, the Forum that was completed by Caeser and Augusto.

Political change took place under these two statesmen, namely transition from a republic to a principality which consequently led to an increase of both the Anciewnt Roman Forums political role and commercial activity. By 54 AC Caesar had already started an enlargement project northward of the Forum with construction of the ‘Forum Iulium' on the area of the ‘comitium' and by moving the ‘curia' and the ‘rostra'.

Moreover, with the realization of the basilica Iulia and the reconstruction of the Emilia, the long sides of the Forum underwent a complete transformation. Under Augusto the forum was used for imperial propaganda. The short side to the east was occupied by the Temple dedicated to ‘divine' Caesar. A triumphant arch was erected in honour of Augusto and one for his nephew, candidate for his succession.

For centuries the Ancient Roman Forum didn't undergo any change and maintained it's role as an instrument of dynastic representation. The major part of construction that followed, such as shrines to divine emperors or triumphant arches, only slightly altered the square. The roman empire up until then had acted as camouflage of the double government of senate and emperor, only at the end of the III century did it rightly become a monarchy and radical building measures were introduced.

Amongst these, the honorary columns on the south side, the monuments to remember the ten years celebrations and the arch of Costantino in the centre of the square erected by the senate in 312AC to celebrate his victory over Massenzio at Ponte Milvio. The column of ‘foca' was the last monument to be built here and was erected in 608 in honour of the Byzantine emperor Oriente Foca.

After centuries of being forgotten, interest in the Ancient Roman Forum was reborn for such places linked to the past during the renaissance period. Nevertheless the new course had devastating consequences for the ancient buildings. Up until now they had been protected by a high layer of earth and vegetation , whereas from now onwards there would be much exploitation of the ancient monuments which occurred in every part of the city.

In fact the return of the papal seat from Avignone to Rome sparked off much haste to construct and the Forum was transformed almost into a stone quarry. It showed a certain change only at the end of the XVII century with ongoing excavations of the Forum, the first of which in 1788. The beginning of the XIX century saw the start of methodical excavation of ruins which continues even today. 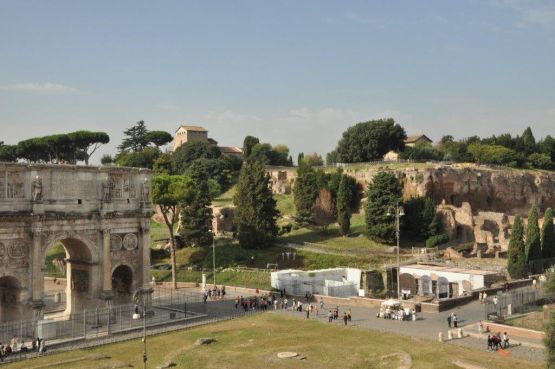