The Ancient Roman Cuisine with its Recipes Rich in Savour

How the Romans ate 2,000 years ago. The type of food that the roman diet consisted of at the time of Julius Caesar. The typical types of food Roman families enjoy at the table.

From recipes handed down to us over the centuries, Ancient Roman cuisine used rich combinations of flavors, at times even daring. Many dishes were strong in taste and smell as the Romans used more spices than we use today in the 21st Century. The Mediterranean was rich in fish and where the sea did not reach the Romans built fish farms on an industrial scale for oysters, mussels and fish.

Meat was highly valued, especially pork and wild game of both the ground and air. It is a little strange to note the absence of beef in the Roman diet, but it should be remembered that cattle were used as laboring animals and that the meat did not suit the palate of Ancient Romans.

Ancient Roman cuisine was particularly healthy since only the freshest ingredients were used and the very best was extracted from each one. Cheese and fruit were always well represented on the Roman table, with the exception of exotic fruits, the Romans only had lemon which they used as moth repellent and dates imported from Egypt.

Mushrooms and truffles were also prized commodities. Wine was also treasured, and as today, there were good wines like the Falerno and not so good wines like those from the Vatican. Romans, however, preferred to drink wine with water and often with other flavors such as honey and spices. During the winter months, wine was drunk warm and for the well-off, it was chilled with snow ( bought at a high price) in the summer.

The Romans woke early to take advantage of the daylight hours, and had a hearty breakfast that they ate with their hands ( as they did for all their meals) while standing up. The adults generally ate the leftovers from the before ( olives, capers, cheese and some honey), and the children were given focaccia and milk.

After this came a long day of work for both country and city dwellers. At midday there was a break for a bite to eat, with the possibility of eating in a local tavern or buying something from one of the numerous street vendors. Lunch was just a snack, as it's today for many modern-day Romans.

The setting sun marked the end of the working day and the family came together for dinner, the main meal of the day, and the most lavish and filling. The meal varied between family to family, depending on whether they lived in the city or the countryside, and in which period of history they lived. The first ancient Romans ate mostly soups of vegetables or cereals, milk, cheese, olives, fruit and from time to time, lard.

As customs became more refined and new food stuffs became part of the diet, bread substituted the soups and meat, which previously had been a rare luxury for the poor, and gradually began to make its way onto the tables of the less well off. The better-off families would often receive guests and hold sumptuous banquets. The evening meal was a series of fixed courses following an order similar to that of today, beginning with an antipasti, followed by the main dish and ending with a dessert. 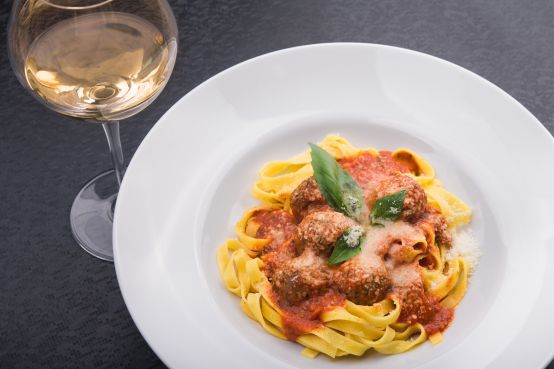