If you want to visit Florence and you are looking for some good tips, you are in the right place. Read our city guide!

Florence City Guide includes tourist information on the various neighborhoods of Florence and their attractions for visitors to the city, as well as other information regarding the less frequented parts of the city.

The city centre of Florence is small and compact, and encourages the visitor to go out and explore its numerous and diverse neighborhoods: this is a fantastic way to appreciate all the places to visit in Florence. Relatively traffic free, the visitor will find delight in discovering the various nooks and crannies, back-streets and stunning viewpoints through which the intrepid traveller can enjoy an intimate experience of this unique and surprising city.

This is Florence at its most chaotic, within the space of a few city blocks you'll find all the must-see attractions of Florence: the Cathedral ( duomo ) and baptistery, Piazza Signori (the main square of Florence), the Uffizzi Museum, Ponte Vecchio (the most beautiful of the bridges that cross the river Arno, as well as numerous other attractions. In this area you can find most of the places to visit in Florence. Often overwhelming in its layer upon layer of history, that we recommend taking our Original Florence Walk to truly appreciate and understand the historical core of the city.

The District of San Marco

North-east of central Florence , it's is one of Florence 's most liveliest quarters that boasts a large student population. The centre of activity is around the Piazza Santissima Annunziata, which is one of Florence 's most beautiful squares. Nearby is the Galleria dell'Accademia which is home to Michelangelo's David, and other works by the great artist: this is certainly one of the most important places to visit in Florence.  For those looking for alternative to visiting museums, the sweet-smelling haven of the Giardino dei Semplice ( garden of samples ) might be a pleasant alternative. Established during the reign of Cosimo, exotic plants were cultivated and oils that were extracted were used to make cures for various ailments.

The District of Santa Croce

Directly east of central Florence , its westerly border includes the Bargello and the principal avenues running eastwards from the Duomo and Palazzo Vecchio. The Santa Croce quarter is the largest of the districts of Florence .

It's a wonderful places to go wondering along interweaving streets with hidden architectural gems to discover from the different periods of Florence 's history. In and around Piazza Santa Croce, there are numerous craft shops, bohemian restaurants and cafe's where you could easily idyll away an afternoon.

The District of Oltrarno

On the far side of the River Arno from the centre of Florence , the word Oltrarno literally means "beyond the Arno ". This area of the city is away from the hordes of tourists, and retains more of a local character.

Its most important monument is the Palazzo Pitti, which is a huge structure that incorporates many important museums as well as the beautiful Boboli Gardens . West of Ponte Vecchio you'll find the area of Santo Spirito which is home to furniture restorers and other artisan workshops.

This area lies directly between the railway station and the Arno river. The streets in and around Piazza Santa Maria Novella are an architectural treasure trove, lined with some of Florence 's most elegant piazza. It's also home to Florence 's finest shopping street Via Tornabuoni.

In between the lavish palazzo's and expensive shops are enchanting medieval streets to see, as well as the Croce al Trebbio, a little shrine erected by the Domenican friars to celebrate the defeat of the Patarene heretics, in a bloody street brawl. 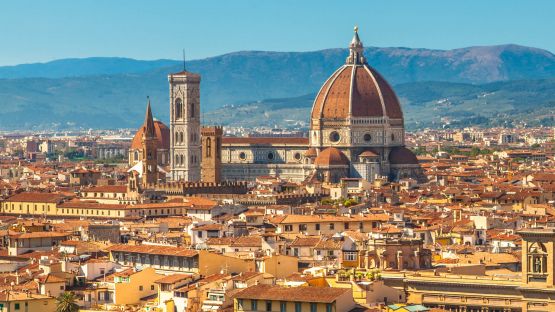