The Sistine Chapel – or the Cappella Sistina – stands on the foundations of an older chapel called the Cappella Magna.

In 1477, Pope Sixtus IV decided to rebuild the old chapel – and in so doing created today’s Sistine Chapel. In 1503 Pope Julius II decided to change the interior of the chapel and commanded Michelangelo to take it on. He initially disagreed because he considered himself a sculptor rather than a painter. But Michelangelo’s 4-year project eventually began in 1508.

And what an undertaking it was. The plain exterior or the chapel gives little hint of the beauty that lies within. At Avventure Bellissime – the Italian tours and Italian holiday expert – we have the pleasure of taking our visitors to the Vatican City on a skip the line tour of the Sistine Chapel. Here, in this post, our tour expert Monica gives a hint on what you can see in the Sistine Chapel frescoes. It is a must see sight during your Italian vacation. We’d love to show you this in person, so if you are planning to visit Italy, please visit our website at tours-italy.com for more information.

The Frescoes along the walls

The first thing to note is that the Sistine Chapel ceiling paintings are the most famous part of the frescoes – but there is more to see in the chapel that the ceiling alone. Before Pope Julius II commissioned Michelangelo, Sixtus commissioned the most highly regarded painters of the period including, Botticelli, Rosselli, Ghirlandaio

and Perugino to fresco the two long walls of the chapel. Even without Michelangelo’s work on the ceiling, the walls represent some of the best frescoes in Europe. One wall represents the story of Christ and the other the story of Moses.

The book of Genesis

Along the central part of the ceiling fresco, you will see Michelangelo’s nine scenes of the Book of Genesis – the first book of the bible. The images are organised into three groups of three pictures. The scenes – Creation, Downfall and Fate - are not in chronological order and appear in reverse order when viewed from the entrance of the chapel.

The ceiling fresco – the narrative

The most famous Sistine Chapel fresco

The creation of Adam is undoubtedly the most famous fresco of the Sistine Chapel frescoes, and it is the most regularly reproduced. It is instantly recognisable with the two, strong muscular figures reaching toward one another in a dramatic pose.

However, when surveying the frescoes you’ll notice that the sizes of the figures vary in size, and some are much smaller and far more detailed. One of the more detailed frescoes is ‘The Deluge’ which has four separate narratives but it is difficult to follow from the floor. It is said that in 1510, Michelangelo took a break from painting the ceiling and when he returned in 1511 he changed his tactic and spent the final year of the project painting images that were much larger and easier to view. These are perhaps the images that are the ones that come to mind when visitors recall their tour of the Sistine Chapel – the Creation of Adam – that show less detail and focus on the main characters but on a much larger scale and also God separating darkness from light and the creation of heaven. God is seen here as a large powerful figure and you will see there is less detail here than the earlier images.

Michelangelo returned in 1537 to paint a final Sistine Chapel fresco on the altar wall that took four years to complete. This depicts The Last Judgement – the second coming of Christ and the final judgement of humankind. It shows the souls of humans rising and descending to their fates – and Christ who is surrounded by well-known saints.

Nothing can compete with seeing the Sistine Chapel in person during your Italian vacation. As the German writer Johann Wolfgang Goethe said of the artwork – “Without having seen the Sistine Chapel one can form no appreciable idea of what one man is capable of achieving.”

If you are planning an Italian vacation or a visit to Rome and the Vatican City Avventure Bellissime – the Italian tours expert - would be delighted to help you explore the Sistine Chapel and the Vatican. You can find out more about our skip the line tours at tours-italy.com

Also, if you are looking for some travel inspiration, then check out our other blog posts. It’s a great read about all things about all things Italian and Italian holidays and includes ideas on what other sights to see when in Rome.

MichelangeloSistine Chapel, The Frescoes, The Book of Genesis

The Ultimate Travel Guide to Visiting the Vatican 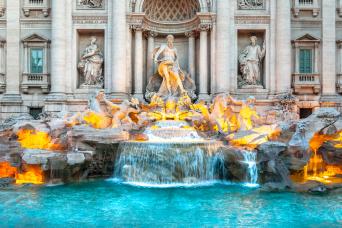