Season by Season: When to Go Where in Italy

One of the amazing things about traveling the world is experiencing different places in different seasons. Many countries have seasons that are especially attractive to visitors, like Japan’s sakura (cherry blossom) season.

In Italy, we are incredibly lucky. Due to the country’s size, geography, and topography, there are incredible places to visit throughout the year. So to help you with your trip planning for 2020, we’ve narrowed it down.

Today, let’s look at Italy in each season and talk about a few places to focus on for each. 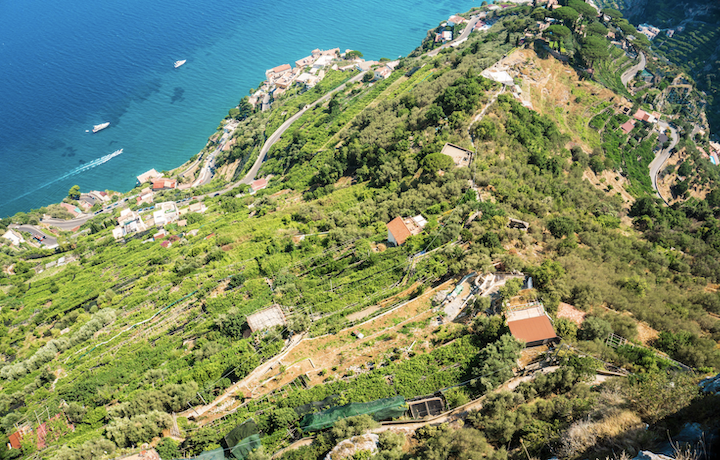 As winter fades to a distant memory and the blossoms start showing on the trees, spring gives us all a little jump in our step. The coast is an incredible place to spend spring in Italy, so that’s where we’ll head.

There’s nowhere quite like the Amalfi Coast—Ravello in particular, which enjoys an array of historic villas and their gardens as they burst into life after the long, cold winter. Think loads of bright green with splashes of color everywhere you look.

Sounds good, right? Stay in magical Sorrento, and escape to beautiful Ravello on this private tour of the Amalfi Coast, Rome, Florence, and Venice. Take in the beautiful villas, enjoy leisurely lunches and take advantage of traveling in the spring shoulder season. 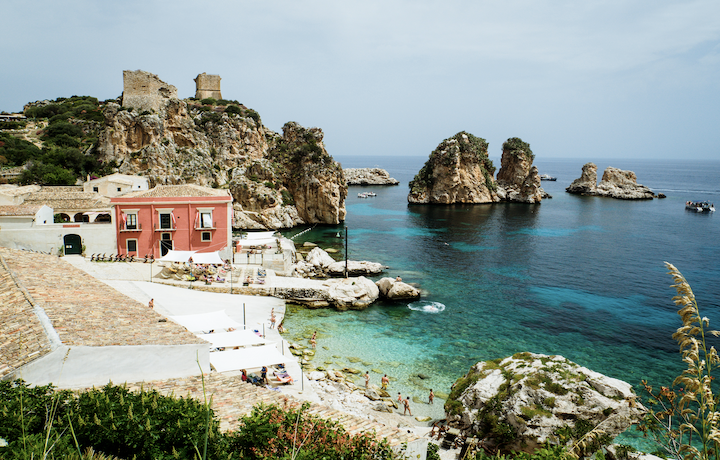 Head to Sicily in spring before the almost oppressive heat of the summer kicks in. Explore the beautiful Greek and Roman ruins along with charming Baroque towns glittering with lights each night.

Sicily isn’t a small island, but the reduced traffic of spring makes getting around much easier. One great way to see all of Sicily is on this 7-day private tour. Take in a Palermo Food and Wine Tour, see the Cathedral of St John, the Norman Palace, and enjoy a cooking class and learn to cook Sicilian pastries.

If you head to Sicily late in spring, you might even be able to catch some time on the beach, so don’t forget your swimming costume! 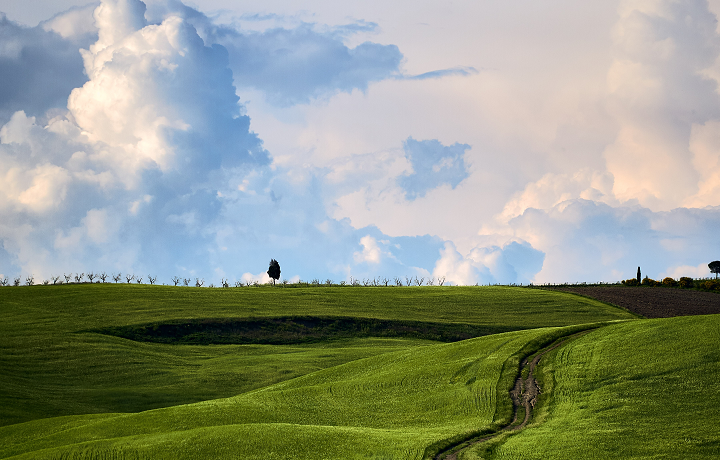 It’s beautiful any time of the year, but in spring the grass turns the most vivid shade of green and there are baby animals everywhere. One great way to experience Tuscany is as a day trip from the capital of Rome.

This full-day tour from Rome treats you to the beautiful hill towns of Montalcino and Montepulciano, as well as food and wine tastings in a region well-known for its fresh, local produce, meat, and seasonal delights.

If you decide to spend a little more time in this beautiful region, pop into Val d’Orcia where the rolling green hills and upright avenues of trees will charm your heart forever. It’s also a UNESCO World Heritage Site due to is Renaissance design that reflects the ideals of good governance while preserving beauty. 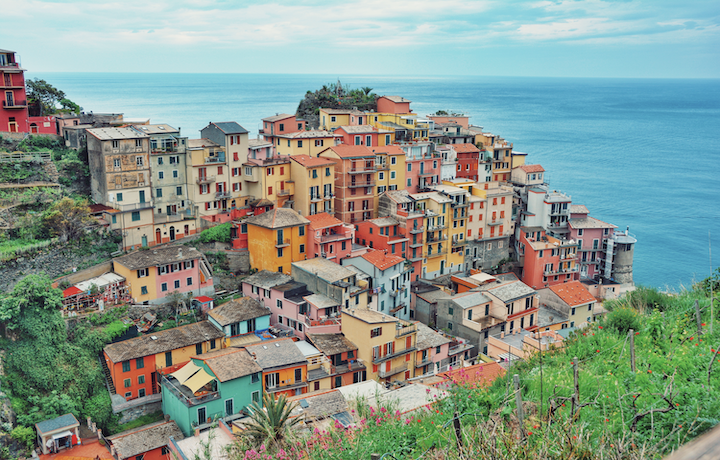 Ah, summer in Italy! It’s on so many bucket lists because it truly is incredible. But while many visitors flock to the main centers for their summer holiday, we suggest doing as the Italians do and heading to the coast, the mountains, or the lakes.

It’s perennially beautiful, but who wouldn’t want to spend the summer in the Cinque Terre? Manarola is a wonderful place to base yourself, and if you plan to explore the towns early in the morning and at dusk, it’s easy to escape the crowds.

This 10-day tour of the Cinque Terre, Rome and Florence allows you to experience the best of all three worlds. It also throws in a couple of walking tours, group tours, and some amazing highlights of each city and town. 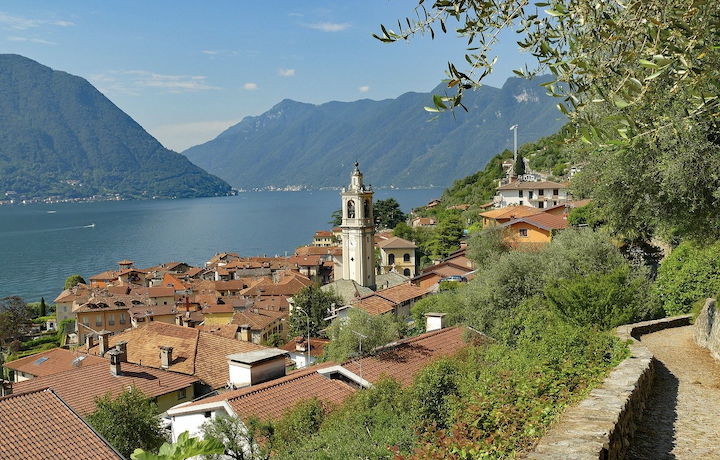 Further north, the heat is slightly less oppressive than closer to the capital, and the Lakes region is a great place to escape to. Both Lake Maggiore and Lake Como have sweet little towns to explore, with red roofs and narrow, winding streets.

This pre- or post-cruise (or standalone) tour of Lake Como, Milan, and Venice is a wonderful way to take in the Northern part of Italy, especially in the busy summer months. Take a dip in the lake, and enjoy the lakes from the water on a boat trip. 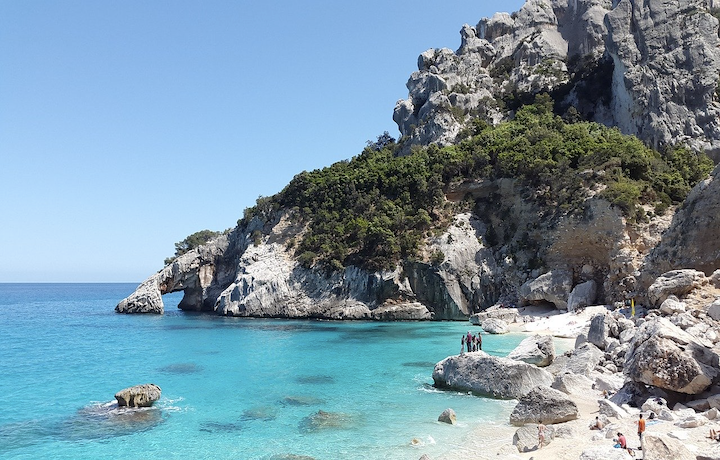 This is one of Italians’ best-kept secrets: Sardinia in summer is amazing! This big island is hugely popular with Italians for their summer holidays although it’s relatively unknown to the rest of the world.

Known for its glorious white sandy beaches, it’s the perfect beach getaway. You can also hike in the Gennargentu Natural Park or explore one of the many caves on the island. There’s also a ton of history to immerse yourself in, including the ancient cities of Tharros and Nora. 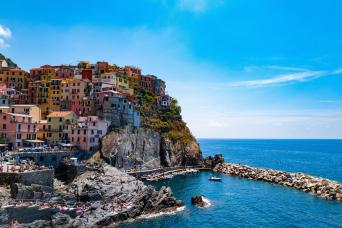 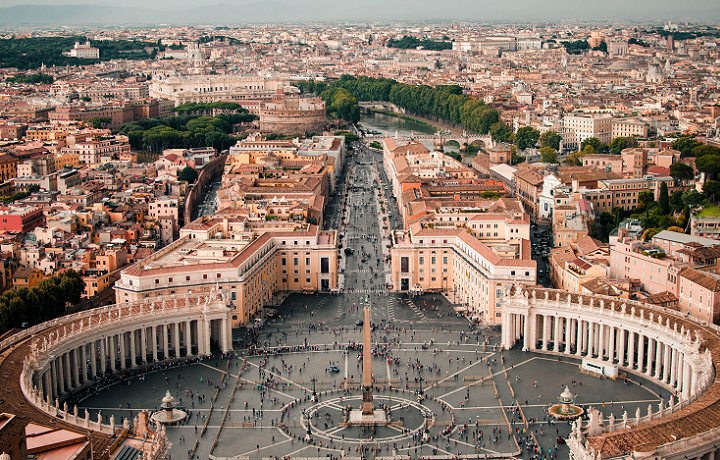 Fall in Italy is spectacular. For the most part, the weather is still pretty great and the many tourists who flock there in the summer months have mostly gone home. That leaves those in the know who visit in the shoulder seasons, a much more authentic experience.

There are so many movies about and set in Italy, but I always think there should be one about fall in Rome. As the majority of the visitors head home and the Romans return from their summer vacations, Rome seems to come to life.

Attractions such as the Colosseum, the Pantheon, and the Vatican offer the same experience throughout the year. But the city is alive with lush, green trees, the last of the summer bloom, and a golden light that touches everything with magic. 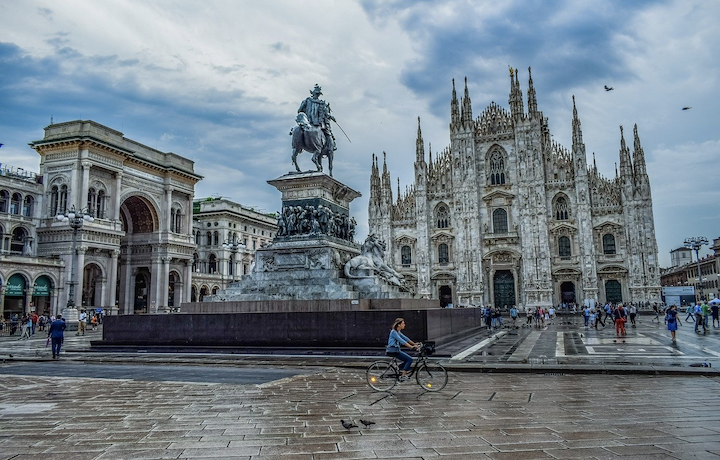 The northern city of Milan is an economic center of Italy, and in the fall, it’s bustling with events. From Fashion Week in late September to the start of Opera Season at La Scala, and many others in between, you surely won’t be bored.

The weather is generally pretty warm, and a great way to see the city is during a walking tour. See the Scala Opera House, the Gothic Duomo, as well as Galleria Vittorio, the oldest shopping mall in the world. 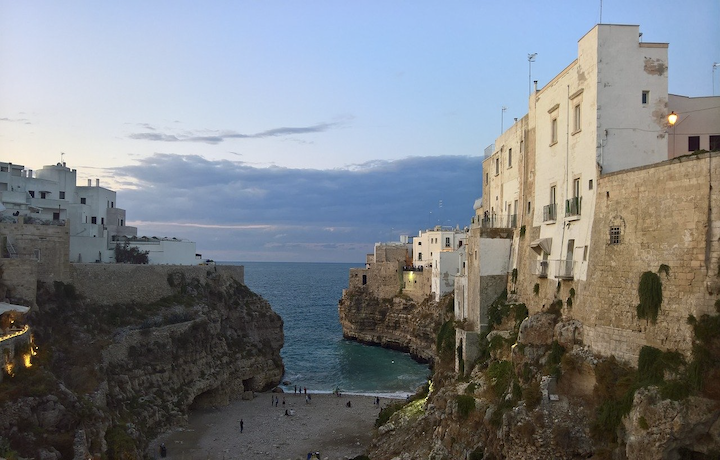 One of the hidden gems of Italy, Puglia is fast becoming a popular place to visit. The food is incredible, the people friendly, and the towns almost impossibly beautiful. From Foggia to Bari, down to Lecce, this is one of the best food-growing regions of Italy.

Taste beautiful green olive oils, fresh, handmade bread, or head out fishing with the townspeople. One of the best experiences is a mozzarella class in a masseria, a traditional local building where people have made food like this for generations.

Did you know we can arrange visits and workshops like this all throughout Italy? Just get in touch here and we’ll make it happen. 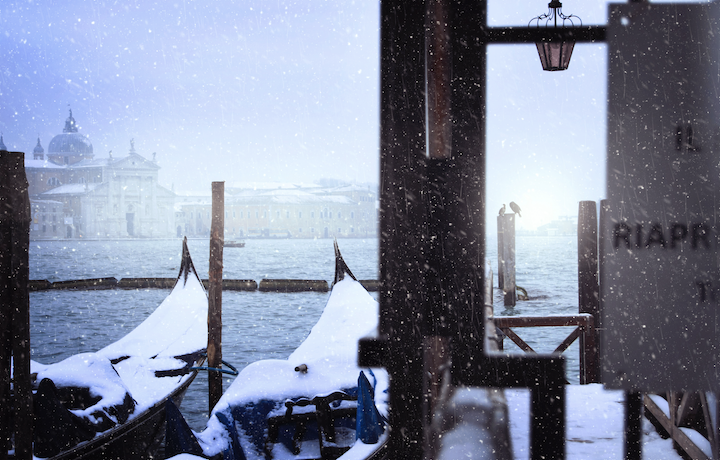 In the winter, some parts of Italy are lucky enough to get a dusting of snow and a collection of cold, clear days when all you need are a jacket and sunglasses. It’s the perfect weather to explore in, and then curl up with a glass of vin brulé, Italian style mulled wine.

One of the most northern coastal cities of Italy, Venice is otherworldly in the winter. The many attractions and sights are quieter, and the air much clearer than during the hot, humid summer months.

The shops are decked in their Christmas finery, and you can still grab a blanket and go out on a romantic gondola ride. Explore the Doge’s Palace and its Bridge of Sighs and prisons, then stroll along some of the most popular sights and hidden gems, before finishing off with a Grand Canal boat tour on this incredible day tour. 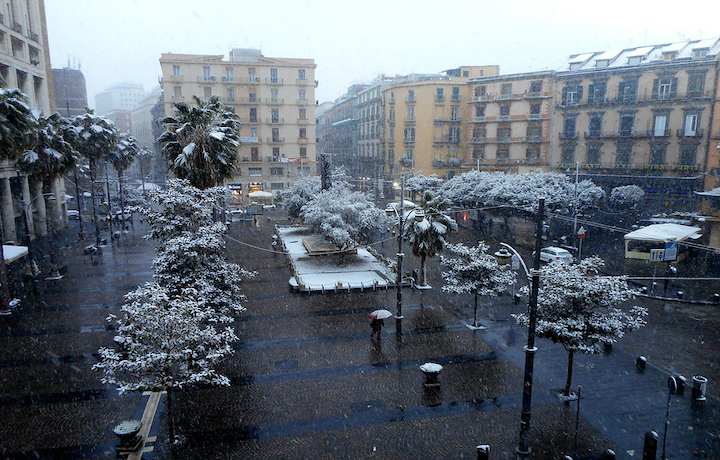 Italy is a predominantly Christian country and Christmas is a big thing here. But nowhere is that truer than in Naples. One of the most beautiful and atmospheric places to spend time in winter, Naples has to be seen to be believed.

Explore the many scene maker’s workshops, and stop in at any of the many Christmas markets. You could also explore the many castles and palaces of this ancient city, and tour nearby Mount Vesuvius and the ruined city of Pompeii. 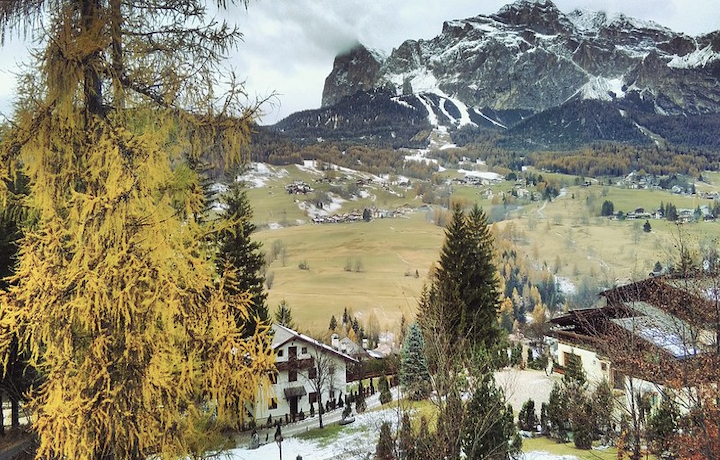 This won’t come as much of a surprise, but one of the best places to spend time in Italy during the winter months is the Dolomites. From skiing and snowboarding, to snowshoeing, winter hiking, and aperitivo, there’s so much to do in the Dolomites.

Not much for snowsports? Cortina D’Ampezzo is known for its incredible shopping and the whole region is a food lover’s paradise. And you don’t even have to stay there to enjoy it. Head out to Cortina on a day trip from Venice and explore visit San Candido and Lake Braies.

Which season will you choose?

As far as I can tell, there’s just no bad time of year to go to Italy. From spring in Sicily and summer in Sardinia, I’d spend fall in Rome and winter in the Dolomites.

Where would you go for your trip to Italy and which season would you choose?

10 Tips for Your Next Italy Vacation 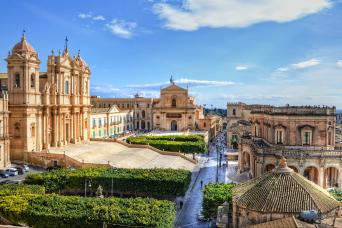 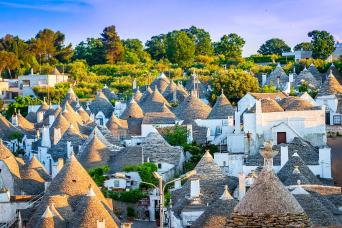 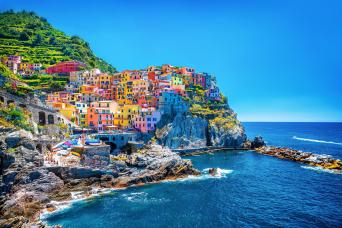