The walls of the medieval town of Monteriggioni encircle the hilltop today with the same solid embrace as when they were built as a fortress in the early 13th century, offering a spectacular view of the surrounding Tuscan countryside.

To fully experience the charm of this medieval stronghold and learn many of her secrets, a private Tuscany tour or small group Italy tour will afford you the opportunity to explore the winding streets and cunning alleyways at your leisure with the expert assistance and cultural context provided by a professional driver-tour escort.

Over 500 meters of stone wall ring the rolling hilltop and the towers are precisely, solidly set at equal distance around the circumference. There are two gates into Monteriggioni: The Porta Fiorentina, which faces Florence to the north and the Porta Romana, which faces Rome to the south.

Entering a wide stone archway into Monteriggioni is like being transported through time. While some of the town’s magnificent towers have crumbled, more than 10 still rise up in defiance of the ghosts of enemies past.

Monteriggioni’s walls held her townspeople safely once upon a time, built by the Sienese as a front line defensive position against the warring citizens of Florence. By the 1500s it was handed over to the infamously powerful Medicis.

The castle walls, built by hand so many generations ago, have crumbled only slightly and survived the age of modern warfare and the European conflicts of the Second World War in particular. It is incredible to imagine the blood, sweat, and sheer strength it must have taken to build such strongly fortified walls without aid of modern construction machinery. What was meant to withstand an onslaught of medieval military might has lasted for us to see and appreciate centuries later.

Anyone with knowledge of the classics is probably aware that Monteriggioni has a place in the richly poetic lines written by Tuscan’s famed poet Dante Alighieri. In the Inferno, Dante uses the image of Monteriggioni’s solid turrets rising above the circular wall to illustrate the appearance of a ring of giants surrounding the abyss: “As with circling round/Of turrets, Monteriggioni crowns his walls;/E’en thus the shore, encompassing the abyss,/Was turreted with giants, half their length/Uprearing, horrible…” (Inferno canto XXXI, 40-45).

If, however, you are travelling with teenagers or those less classically inspired, you may want to share that the remarkable old world architecture of this town serves as the backdrop in the popular Assassin’s Creed II and Assassin’s Creed: Brotherhood video games.

The square, solid towers that inspired Dante and the designers of one of the most popular modern video games once provided protection for sentries watching for the enemy, but now offer a glimpse into Italy’s rich historical past and allow for incredible photographic opportunities. As you survey the surrounding countryside it still feels like a Middle Ages outpost between Sienna and Florence if you can forget the modern villagers, tourists, and motorized vehicles.

From atop the wall that surrounds Monteriggioni more than 70,000 visitors a year enjoy the view of the main square, or piazza, in the centre. There is a beautiful Romanesque church on one side of the main piazza and several other old-style buildings, including Renaissance homes. Walkways and cobblestone streets lead to bars, restaurants, and shops as well as well-groomed gardens. There are ample opportunities to enjoy fine food and wine inside or, depending on the time of year, al fresco.

The pace of life is slower here – paradoxically modern with first class dining and well appointed shops residing in the old-style architecture. This is a village where you’ll see a fluffy gatti (cat) amble by or some anatre (ducks) waddling around and feel welcome to stop, admire, and enjoy the moments as they arise.

Ready to explore the Tuscan treasures of Monteriggioni? Visit Avventure Bellissime online now to book one of our Florence tours for your next Italian vacation. 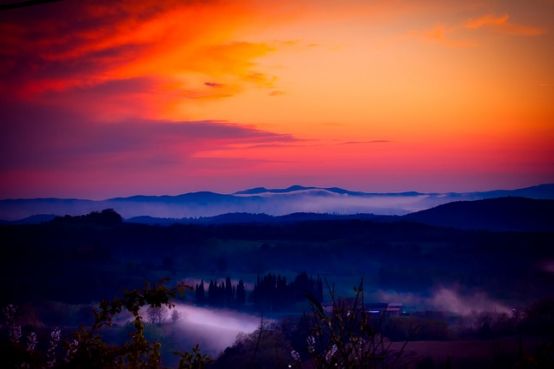