From which the word "Ghetto" derived, the Jewish ghetto of Venice is the world's oldest. Until 1385, when the first Jews began to settle in Venice , Jews were only allowed to come to Venice for money-lending purposes. But, in 1385, when the city was involved in a war with nearby Chioggia , they needed loans from Jewish money-lenders to finance their campaign and so they allowed Jews to move into the city.

Although, the Jews never were allowed to properly assimilate into the city's population, and in 1516, the ruling council of Venice confined all Jews to a small area of the city quite a distance from Piazza San Marco and the heart of the city.

Where, at night, all routes leading in an out of the Ghetto were guarded and sealed by locked gates. The Jews had limitations set on their economic activities in Venice . They were only allowed to have pawn shops, trade textiles and practice medicine.

Whenever the Jews left the Ghetto area the men had to wear a yellow circle stitched on the left shoulder, while the women wore a yellow scarf. The first Jews to settle in the ghetto of Venice were central European Ashkenazim, who constructed two synagogues: in 1528, the Scuola Grande Tedesca, and later in 1532, the Scuola Canton. They are still intact, and occupy the rooms above and adjacent to the Jewish museum. 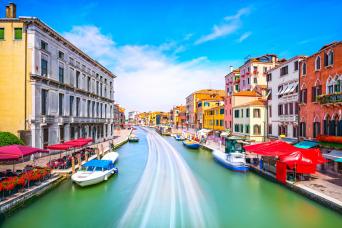 Enjoy a private tour of the Cannaregio district and the famous Jewish Ghetto, led by licensed expert Venice tour guides!

In an area where space was limited, the Jews had no real choice but to build their synagogues in the attic storeys of buildings as Jewish law forbids that anything should come between the synagogue and the sky. The next group of Jews to arrive in Venice were the Levantine, who got their neighbourhood granted to them in 1541, as part of an expansion of the Jewish ghetto.

This area today, is known as the "new ghetto". The Levantine Jews were rich enough to build their synagogue on the ground, and the rich red and gold interior of the Levantine synagogue is particularly special.

Mixed in with the Levantine and Ashkenazim Jews, were Italian Jews who migrated north to Venice from the central and southern parts of the peninsula. In 1575, the Italians built their own synagogue, the Scuola Italiana, which was built on of apartments.

The structure features a cupola which is barely visible from the square below. Around 1650, the Ghettos population reached a peak at 4,000 inhabitants. A feat hard to believe as you wonder around today, an area no bigger than two and a half city blocks.

Before the second world war, there were still 1300 Jews living in the Ghetto. Of those, 289 were deported by the Nazi's, and only seven returned.

Today, along with neighbouring Mestre on the mainland, Venice boasts a population of 600 Jews. Even though the ghetto continues to be the centre of community activities for the Jewish community, very few Jews continue to live in the ghetto.

But, at least, the ancient stones remain to tell the story of another time, when a small united community living in Medieval skyscrapers, found their home in the Venetian lagoon.