This spectacular day trip will make you marvel that so much beauty can be packed into just 12 hours. Our expert driver-guide will take you to the main sights of Italy’s stunning coastline: Sorrento, Positano, Amalfi and Ravello.

In Italian this scenic stretch of coastline south of Naples is called Costiera Amalfitana. It has inspired artists and celebrities for centuries, the resort towns that drew composers and writers last century and the one earlier still attracting the rich, famous, and creative today.

Known as the millionaires’ coast, the Amalfi Coast has luxury hotels tucked in among vineyards, olive groves and lemon trees and nestled near the charming towns that sit perched, overlooking the Mediterranean seascape.

The exquisite beauty of these terraced villages, strung like glittering beads on a delicate rosary, has drawn the likes of composer Richard Wagner, painter Joan Miro, and writers Tennessee Williams, John Steinbeck, and D.H. Lawrence. Silver screen greats who got away from it all here include Sophia Loren and Humphrey Bogart.

It’s not just those pursued by the paparazzi who value the unique features of the Amalfi Coast. In 1997 the United Nations Educational, Scientific and Cultural Organisation (UNESCO) awarded the Costiera Amalfitana a spot on its prestigious World Heritage list.

According to UNESCO, the Amalfi Coast deserved inclusion because it is “an outstanding example of a Mediterranean landscape, with exceptional cultural and natural scenic values.”

Sun-drenched Sorrento is an ancient city. Once settled by Corinthians, it was later inhabited by ancient Romans, which is still evident in the architecture and planning of the city centre. It was busy throughout the Middle Ages, overtaken by Goths and Byzantines before it was raided and pillaged by seafaring pirates. The cobblestone streets and medieval alleyways are home to countless artisans today, making Sorrento an interesting destination for travellers.

Near the Vallone di Furore, which is one of the Amalfi Coast’s most spectacular gorges, is a majestic little village called Positano. Considered by many to be the prettiest (and hence most photographic) of the coastal villages, Positano draws many visitors. The steep streets link houses and shops that are impossibly stacked and terraced into the Cliffside. Expect to find boutique stores, jewellery vendors, and world-class restaurants here.

This scenic village is on the seaside and extremely popular because of its idyllic seafront setting and mild climate. At one time this was one of the country’s most powerful maritime republics, governing trade on the Mediterranean seas. Its rich history, vibrant shops, and busy restaurants are what bring travellers in droves to Amalfi today.

Illustrating the differences you’ll experience along the Amalfi coast, Ravello is far above sea level in contrast to the seaside Amalfi. Its lofty height of 365 meters (over 1,000 feet) above sea level ensures panoramic views of the Mediterranean. For hundreds of years people have ventured up the steep, terraced slopes to enjoy the view and admire the beautiful gardens of local villas. Popes and kings have stayed in Ravello, as have countless other notable people. No matter who you are, you can’t help but be seduced by the allure of this elevated village – especially the famous Villa Cimbrone’s “Terrace of Infinity” and its endless view of the Amalfi Coast.

To see and understand the rich past and valuable heritage of these villages on the Amalfi Coast, book a private Amalfi Coast Day Tour. Don’t forget your camera! 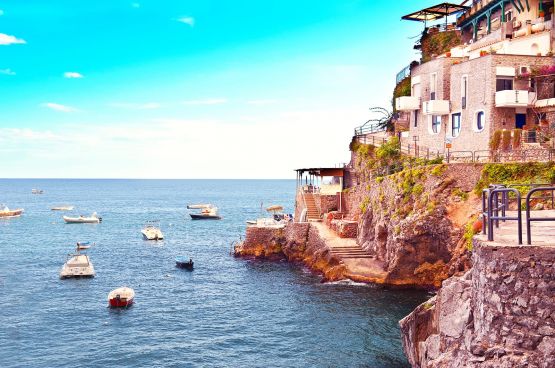 Best Beaches on the Amalfi Coast