A big country-wide birthday celebration is underway in Italy this summer that most travelers enjoying Italy Tours and Italy Vacation Packages should get to experience.

Whose birthday is important enough to be celebrated by Italians in every region you might visit on an Italian vacation? Here’s a hint: The 750 candles on his birthday cake could create quite an inferno, one befitting the creator of many literary works but best known for his masterpiece Divine Comedy.

If you guessed the Florentine poet Dante (bonus points if you could give his full name Durante degli Alighieri) you will feel right at home this year amid the special exhibits, concerts, and performances that are planned in Florence, Ravenna, Verona, Rome, and elsewhere in Italy. And if you’re not planning a trip to Italy this year, don’t worry. Celebrations will continue until 2021, which marks the 700th anniversary of Dante’s death.

There are also more than 173 events planned by Italian Cultural Institutes around the globe and a Twitter hashtag #Dante750 to share how you participate in the festivities.

For those unfamiliar with Dante (and then we know you’re not Italian!), his epic three-part Divine Comedy is considered one of the world’s best examples of literature. In Italy, he is revered and known as il Poeta (the Poet) or il Sommo Poeta (the Supreme Poet). Dante wrote his Divine Comedy between 1308 and 1320 as an allegorical journey through hell, purgatory, and heaven.

While many focus on first part, the Inferno, the boundless mercy of God chronicled in Purgatorio (Purgatory) and the divine promise of redemption explored in Paradiso (Paradise) are themes all Italians know well by the time they are old enough to enjoy a glass of vino (wine) on Italy wine and food tours.

School children in Italy start reading his masterpiece as pre-teens through to post-secondary. Even now, hundreds of years later, Dante’s work is quoted by Italians and lines from his poetry are regularly woven into the fabric of everyday life. A recent article by The New Yorker examines the enduring hold of Dante’s work and highlights that his anti-authoritarian stance certainly resonates with modern Italians.

The Italian government held its formal celebration of the 750th anniversary of Dante’s birth in early May. The president of the Pontifical Council for Culture read a message from Pope Francis, in which the pontiff said Dante’s Divine Comedy is an invitation, “to rediscover the lost or obscured meaning of our human path and to hope to see again the glowing horizon on which the dignity of the human person shines in its fullness.”

Pope Francis called Dante ‘a prophet of hope’ and ‘herald of the possibility of redemption.’ If you are looking to add to your summer reading list, Pope Francis would like Catholics to read Dante’s Divine Comedy as a spiritual guide as they prepare for the special Holy Year of Mercy he has declared and which will run from December 8 to November 20, 2016.

Oscar-winning Italian actor Roberto Benigni read from the XXIII Canto of Paradiso in the Italian Senate and received a standing ovation:

"The Divine Comedy is a miracle, a work whose beauty takes your breath away," said Benigni.

Would you like to visit the Italian cities most associated with Dante? We offer several small group and private tours of Florence, can give you many reasons to rendezvous in Ravenna, introduce you to the beauty and romance of Verona, and recommend the best summer destinations in Rome. 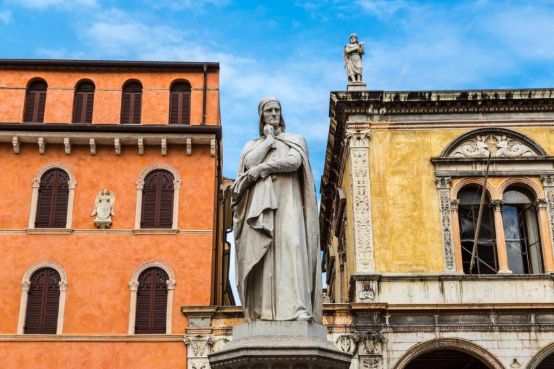