Attractions of Naples and things to do and to see in Naples, including tours of the city, the Duomo, Sansevero's Chapel, the Archaeological Museum of Pompeii and what to do in the Amalfi Coast.

One of the major landmarks of the city of Naples is the Castel Nuovo, a massive fortress that was rebuilt by the Spanish-aligned Aragonese rulers in the 14th Century. Within the heavy-stone walls of the castle you'll find sculptures and frescoes from the 14th & 15th centuries, as well as the cities civic museum. From the castle you can enjoy splendid views of the port and city.

The Duomo of Naples is a popular tourist attraction mainly related to modern-day festivities. The main Cathedral of the city was founded in the 1200's. Over the years it has undergone radical changes as different elements like the 110 ancient columns salvaged from ancient pagan buildings used for one reconstruction of the church. On the left hand side of the church as you enter is the older 4th century church of Santa Restituta, but the main focus of the church is the Capella of San Gennaro the patron saint of Naples.

Twice a year, on his feast day on the 19th September and on the first Sunday in May which celebrates the transfer of his relics to Naples two sealed vials believed to contain his blood are paraded before the worshippers. And during these festivities the locals claim a miracle takes place as the blood of San Gennaro liquefies.

The most important tourist attraction in Naples is the National Archaeological Museum located in a huge old cavalry barracks that houses many of the treasures discovered at Pompeii and other ancient Roman excavation in and around the city of Naples. It's treasure are not only limited to the Romans, there are also Greek pieces as well such as the delightful Aphrodite attributed to a 4th century Greek sculptor.

In addition to the dominant sculptures that quite breath-taking in their sheer scale and detail, you'll also find vividly coloured mosaics, as well as countless artistic and household objects retrived from Pompeii. Along with an intact fresco unearthed from Pompeii and some 90 m wide you'll find a treasure-trove of antiquities that any museum in the world would envy.

A journey on one of the funicular cars up to the dizzy heights of Vomero is a big attraction for tourists visiting Naples from where you can enjoy breath-taking views of the Gulf of Naples, as well as enjoying a stroll through Naples most peaceful and more wealthier neighbourhoods.

In between attractions don't forget to linger on the backstreets of Spaccanapoli where the narrow congested streets lined with markets and stalls selling all varieties products, along with the locals go about their business without a care in the world make a tourist attraction in their own right.

In this area you'll also find tours of the Underground Naples where you'll descend below the streets to discover the tunnels and catacombs from old roman times and hear interesting stories from during the time of the last war and more recent history in Naples and the various characters who have utilized subterranean Naples to avoid the authorities.

Private Naples shore excursions to Pompeii & Mount Vesuvius can depart from your cruise ship at the port of Naples, or booked 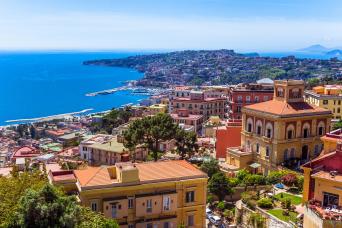